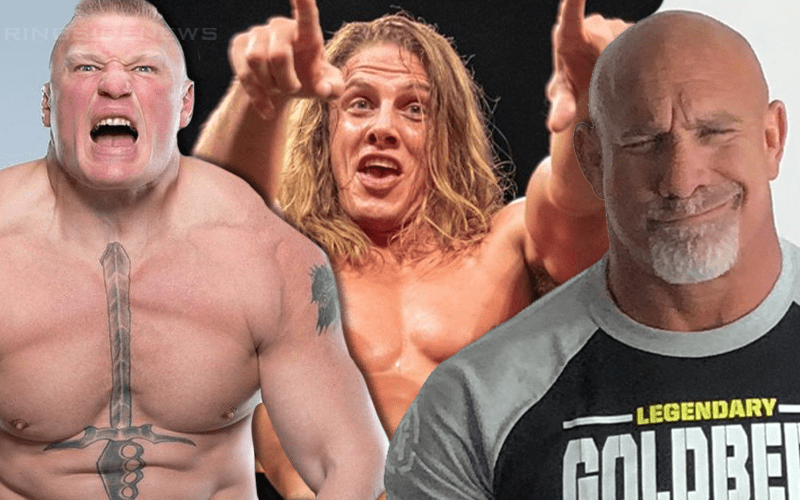 Matt Riddle recently had a lot to say about Goldberg’s performance at the WWE Super ShowDown event and he’s not done yet.

It’s been said that Riddle isn’t a fan of Goldberg because he sees the former face of WCW as someone who was just in it for the money. The fact that Goldberg played an MMA gimmick also didn’t set well with the King Of Bros.

As he spoke to TalkSport, Matt Riddle opened up about how he really feels about Goldberg. Needless to say, he didn’t hold anything back.

“The thing for me is, and one of the reasons I was never a fan of Goldberg in the beginning when everybody was like ‘oh, he’s so good!’ I was like ‘no, he’s terrible, he’s hurting people’ and there’s nothing else. He just has three-minute matches.”

“And that was my thing and when people say ‘who was your favorite wrestler?’ I really don’t have one. I just liked really good wrestling. That’s why I fight and I do that. So for me, I don’t care how much money he makes, I’m just glad people were entertained. But, stick to your wheelhouse, bro. And stop headbutting doors before you wrestle. And I’m not hating – I’m not hating – I’m just spitting facts and these are all facts and things he should take into consideration. And not just for me, not because he got made fun of, but for his health as well.”

He might not be a huge fan of Goldberg, but the Original Bro has a lot of respect for Brock Lesnar. Because The Beast Incarnate is a hard worker and that obviously shows by how he maintains his physique. The fact that Brock is well-versed in several different skill sets is also a reason to respect him.

“I have a huge amount of respect for Lesnar [as opposed to Goldberg]. You know, he’s done everything since he came into it. He works hard. You don’t look like Lesnar without working hard.”

“You don’t pick up things, get to the top of multiple industries and sports without working hard. Do I like his work, per se, and his attitude right now? No. But, I think that’s why it’s good [between them]. He’s the complete opposite of me, but we’re the same.”

Just because Riddle respects Brock Lesnar doesn’t mean that he isn’t more than willing to retire him. We previously reported that Riddle really wants that match, but some of those reasons could be the respect he actually has for Lesnar, unlike Goldberg.

“Just like with the Goldberg stuff – I’m me. I let them know before I signed, because I had opportunities to go work other places and we were discussing and my thing was, I didn’t want to let them down.”

“I’m going to tell you who I am, I’m very honest and even with [Matt] Bloom, we’ve gotten into it where I’m like ‘hey man, I think you’re disrespecting me’ and he’s like ‘what!’ and we get into it but then we’re better afterwards because I don’t hold anything back. I’m very honest. I’ll talk, and I’ll talk some sh*t, I’ll say some stuff. But, at the same time, it’s usually true, I back it up and I think they [WWE] respect that. I think if I was a bad worker and then I did everything that I do, they’d be like ‘hate this guy’. But, all the talents like Triple H and Shawn Michaels, they know I’m legit as hell and they love it. Same thing with [William] Regal and [Robbie] Brookside or anybody else, they all know.”

We will have to wait and see what’s next for Matt Riddle. It is said that he will be in NXT for a while which is the reason why he’s not getting an NXT Title shot in Toronto.

All we can say is after Riddle opened up like this there could be a lot of money in seeing him face either Goldberg or Brock Lesnar.