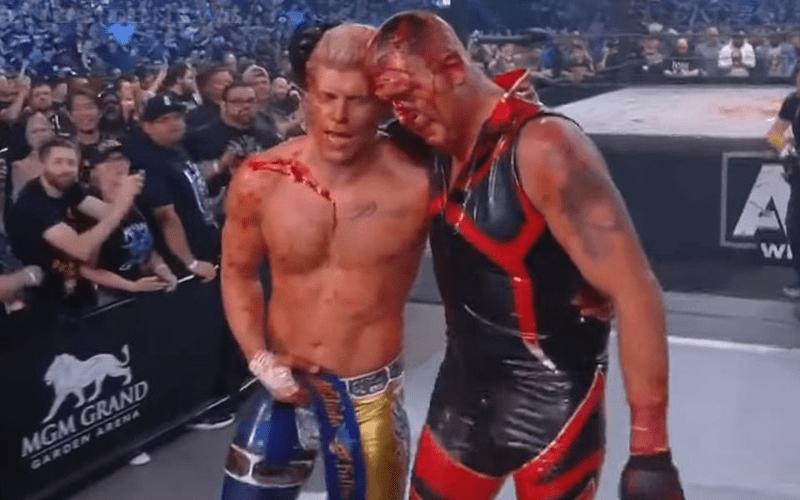 Dustin Rhodes and his brother Cody Rhodes went to war at AEW Double Or Nothing. This was a bloody confrontation thanks to Brandi Rhodes whacking him with Cody’s cane although some fans still think it was caused by Dustin blading himself.

Regardless of how Dustin Rhodes claims that he was busted open at AEW Double Or Nothing, as we previously reported he had no idea that Cody Rhodes was going to offer him another match following their Double Or Nothing war.

Now the Rhodes Brothers will face The Lucha Bros at AEW Fight For The Fallen in a dream match.

As he spoke in the media scrum following AEW Double Or Nothing, Dustin Rhodes admitted that he nearly left his boots in the ring. This would have been a very powerful message that his career was over after Cody “killed the Attitude Era.”

I was, and he snuck in behind me. I was like, ‘Geez, let me get my boots off before you do anything. My God, I want to leave this boot in the ring and say goodbye, proper.’ I was tired, and he came in and I didn’t know what to expect, or what he was going to do. He killed the Attitude Era, but I’m still standing here today.”

Of course, leaving your boots in the ring doesn’t explicitly mean retirement. Because The Undertaker left his hat and gloves in the middle of the ring at WrestleMania 33, but he has made a few returns since then.

It still would have sent a very powerful message if Dustin Rhodes would have taken his boots off at Double Or Nothing, but now it appears his career is far from over.