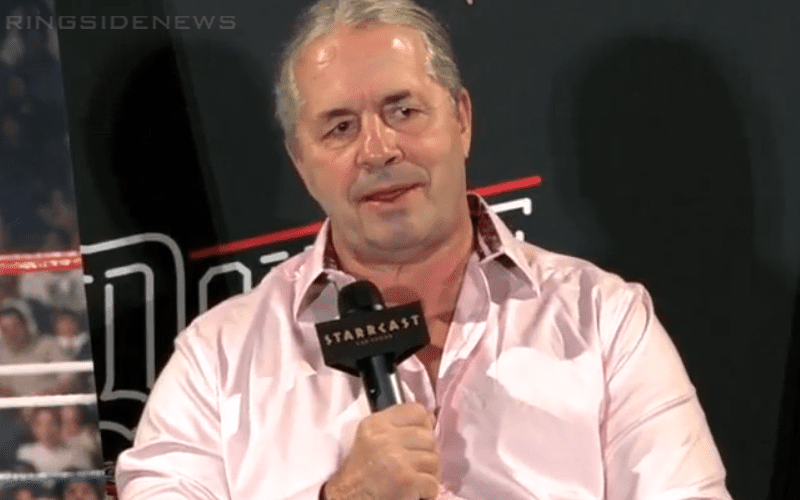 Bret Hart had a lot to say during his Starrcast Q&A. He recently made headlines, but not in a way that he would probably prefer. His WWE HOF induction as part of the Hart Foundation was interrupted as a rogue “fan” attacked him.

Hart’s attacker didn’t get away with taking The Hitman down. In fact, there was a swarm of eager trained fighters including Travis Browne who wanted to tear this guy apart. Now he is facing two assault charges and criminal trespassing.

Hart said his WWE Hall Of Fame speech was important to him this year and he wanted to speak on Jim Neidhart’s behalf. He also said that so many inductees will thank Vince McMahon, Stephanie McMahon, and Triple H and that’s “bullsh*t.” He wanted to thank the wrestlers who he actually had a chance to work with.

He said it’s insane that the Freebirds and the Rock n Roll Express are in the HOF when they never wrestled in WWE. Hart said he was in the locker room when Michael Hayes was fired by Vince McMahon for being drunk and by the time Terry Gordy was in the WWE “his brain was gone” from drug use.

Bret Hart also said that he was in the locker room when the Rock n Roll Express were told that they were too small for WWE.

“If you’re going to give Freebirds the Hall Of Fame for being drunk all the time at least you need to induct Demolition.”

The attack during his Hall Of Fame speech was brought up and the crowd booed. Hart said he wanted to speak about The Anvil and he wanted to finish the speech that he worked on for months. So the attack wasn’t going to stop him.

Hart said he thought he had it down right and when that guy interrupted his speech they were trying to usher them off and end the Hart Foundation’s time, but Bret wasn’t finished. He had things he wanted to say so he went back and completed his speech like a pro.

Bret Hart also said that he felt bad for his attacker because that guy got destroyed by more than a few educated hands.