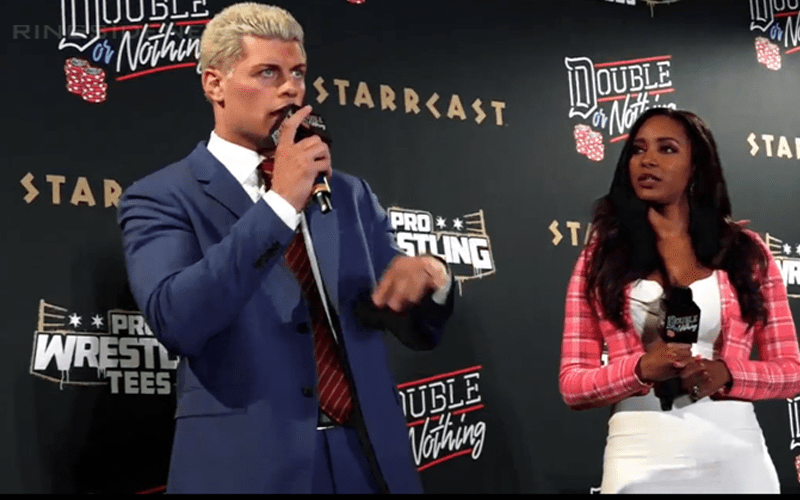 AEW is going to present a sporting environment to pro wrestling and they advertised weigh-ins for Double Or Nothing to add an extra bit of legitimacy to the event.

The official weigh-ins are now in the books and we have all of the numbers right here at Ringside News.

Of course, before the event could start they had to kick out MJF who had been able to sneak back in after just getting ejected from the event about an hour earlier. He’s banned from Starrcast and for good reason.

First, Kylie Rae got to cut a promo before things started about how real she is. She said it’s not a gimmick and then she introduced a fan who proposed to his girlfriend.

Cody said he wanted to talk about women’s wrestling and then the 24/7 Title. Brandi kept cutting him off saying “do you want to talk about something that they won’t click bait.” Funny.

Then they accepted some questions since Cody apparently can’t talk about anything he did last night because “it was a disaster” as Brandi put it.

They finally got to the first weigh-in after hyping up Double Or Nothing once again. As it turns out, it was the only weigh-in.

This match is going on first, but Sammy Guevara said that people will regret it not main eventing the show. Then he said Kip is only in AEW because of a TV deal. Guevara is a good heel in AEW, but a babyface on his YouTube channel.

Sabian and Guevara shook hands in the middle of the stage after they weighed in and Sammy kicked Kip in the crotch. Then Sabian grabbed the microphone and yelled that he is going to “f*ck him up.”

The Young Bucks came out next and talked for a bit about their beginnings and how they pulled themselves out of debt to be where they are today. Next they introduced Dustin Rhodes.

Goldy said Double Or Nothing is the most important thing he’s ever done in his career. He said there is nothing he can do in this business that will ever top what he’s going to do at Double Or Nothing against Cody Rhodes.

Dustin Rhodes said he considers himself one of last outlaws of the Attitude Era. He is not Ole Yeller and Cody wants to put a bullet in his head. Dustin Rhodes said he’s ready for Double Or Nothing because he trained his ass off. He never lost it, he’s always had it and even if it’s his last match then he’s going to bring his all.

Then Dustin Rhodes said sometimes when you take aim, cock your hammer back and shoot a horse they end up coming for you. Great visual. Finally, Dustin Rhodes took off his button-up shirt to reveal he was wearing a t-shirt that said “Dusty’s Favorite.” The crowd popped big for that one.

Before Dustin left, the crowd broke into “Dusty’s Favorite” chants.

So there you go. That’s the Double Or Nothing weigh-in which was literally just one match’s worth of weigh-ins. At least we got some promos out of the show.

We will be providing live coverage for Double Or Nothing right her at Ringside News and it will all kick off at 7:00 PM.