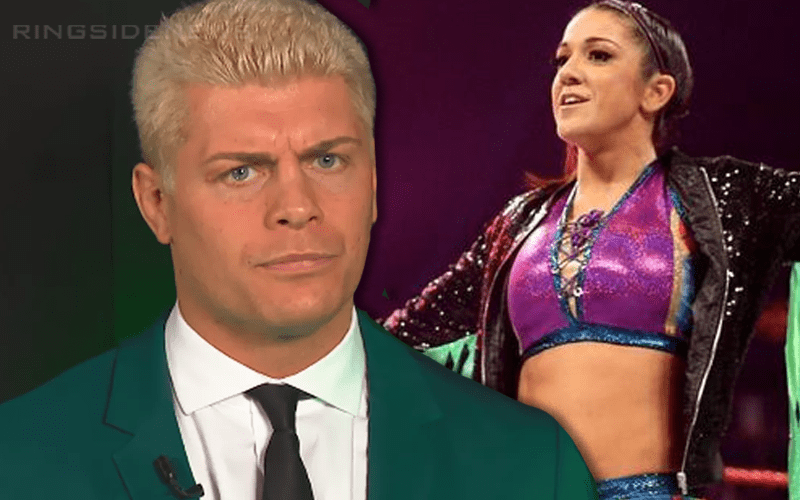 Cody Rhodes is in a great mood right now, but why wouldn’t he be? Double Or Nothing is right around the corner and he will soon see the result of a lot of hard work pay off. However, he might have said something about Bayley that he is trying to take back now.

AEW has a lot of great people on their roster not including MJF. Kylie Rae is a tremendous talent and has an incredible passion for pro wrestling as well. When talking about how great Kylie Rae is, Cody Rhodes said:

“She’s not like wacky inflatable tubemen pretending to be nice.”

That certainly seemed like shade to the Starrcast crowd and the IWC agreed. It made a lot of people also wonder what kind of stuff Rhodes saw from The Hugger that would make him say that she was “pretending to be nice.”

Rhodes was asked what he said about Bayley on Twitter. Then he replied to not only lessen the gravity of his previous remarks, but also put The Hugger over in the process.

Made a crack about the wacky inflatable tubeman. Meant no harm. She’s awesome.

Cody Rhodes might not have meant the words he said while referencing Bayley, but fans aren’t easy to forget things like this. However, it turns out that everything is fine and he meant no harm in what he said.

If anything, now we know that Cody Rhodes thinks that the current SmackDown Women’s Champion is awesome.