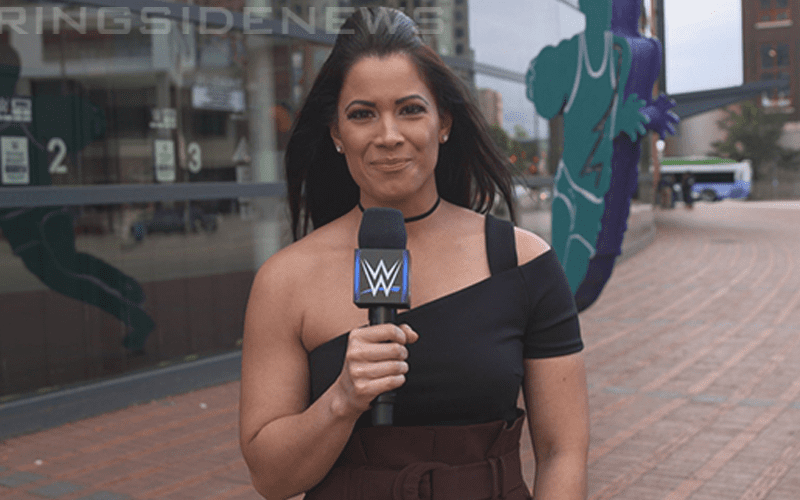 Dasha Fuentes is no longer a backstage interviewer for WWE. She claims that WWE told her that her firing was caused by a series of events.

Fuentes recently sat down with Chris Van Vliet where her WWE release came up in conversation. She couldn’t understand why she was released although she was told that it took place after a “series of events.”

After watching her final interview on RAW with Roman Reigns, Fuentes said “there was a tiny little blip” that went down live, but she figured everything was okay. That apparently, was not the case.

“My manager at the time told me I was being released. I don’t want to name too many names but my manager called me and that was another thing, they called me on a Tuesday and I was told ‘After the events that occurred on Monday Night Raw, we are taking you off TV and you’re not going to WrestleMania.'”

“I literally went back and I watched the interview and there a tiny little blip that happened but it was live, it was with Roman and I figured it was a pretty good interview and I could see the growth and consistency that was happening from week to week. So I was like ‘Series of events?’ and I was just taken aback.”

“I figured I would relax and not freak out about this, maybe they’re going to send me back to NXT because a lot of people don’t know that I ring announced for NXT and that’s my passion, I love ring announcing. I was told I’d get a call the next week and told what was going on. Well, the following Monday after WrestleMania I got a call that lasted literally like a minute and a half and they said ‘We’re letting you go’ and I was like ‘Well, thanks for 5 years.’ and that’s it.”

Dasha said that she was a bit bummed to be released by WWE so suddenly, but she’s not letting it get her down. She spent 5 years with the company and had a great time. Not it is on to her next adventure.

After getting to travel with the company and having her recent injury taken care of while under WWE’s umbrella she is going to remain optimistic which is the best way to take this situation, even if she doesn’t 100% understand why she was let go in the first place.