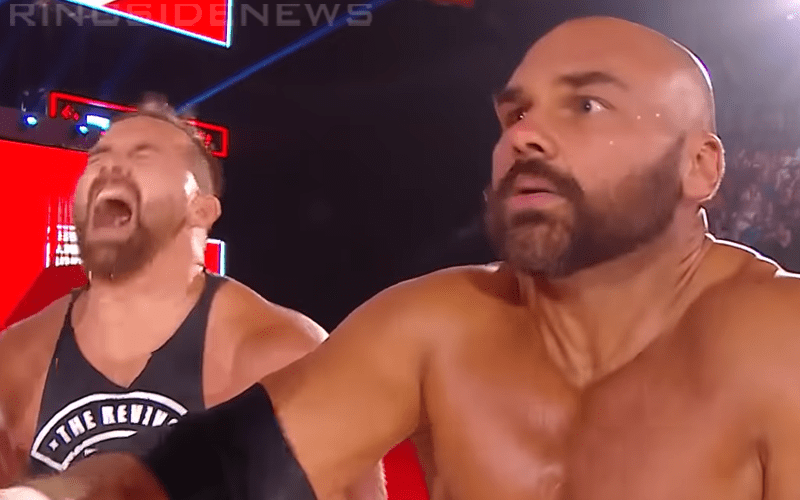 WWE has their own tactics about how to deal with Superstars. One thing they do if a Superstar is on their way out of the company is embarrass them at every opportunity they can. It looks like that is not going to change.

The Revival are not re-signing with WWE while saying that they’re going to wait things out to see how WWE books them this year. Instead of making things better for Dawson and Wilder, WWE is going to embarrass them so it damages their value in the market.

Dave Meltzer broke down the latest segment intended to embarrass The Revival during Wrestling Observer Radio. If you’re not a fan of seeing the Top Guys get humiliated then there might be a long road ahead.

“It’s not a secret why it happened. The things is they want, it’s not like you know, it’s not like they’re just going to beat guys on the way out. They want to make sure that these guys are the geeks of all geeks that they have no market value whatsoever. I mean there’s a goal here it’s I don’t want to say it’s diabolical — it’s very transparent what it is. It’s not even surprising. It’s just not fun to watch it. It’s like really not fun to watch at all, but this is what it’s determined to be.”

“For a company that’s looking for whatever it is — $310 million in profits in a year or two they sure are scared of this other company just starting up you know what I mean that only had tickets available for two shows and all that.”

The thinking is that The Revival would be on their way to AEW if WWE let them go. This is not something WWE wants, but they don’t want any of their stars helping out a competitor no matter who they are.

To The Revival’s credit, at least they’re getting a spotlight on them. Because The Good Brothers were supposed to be their opponents on RAW this week. Luke Gallows and Karl Anderson are also said to be leaving WWE as well. So the company took a different tactic with Gallows and Anderson by simply not booking them.

As much as it might have been a groaning moment to watch The Revival rub themselves on the ground while trying and help cool their bathing suit area itches, it was noted that “there’s more of this, it’s not going away.”

WWE will likely continue to embarrass The Revival every single week. They don’t want them to have any value in the larger market when they leave the company.

It’s also likely that anywhere Dash Wilder and Scott Dawson will go following WWE will have fans that are smart enough to realize how great they are in the ring. So the WWE burial might not make that big of a difference in the end.