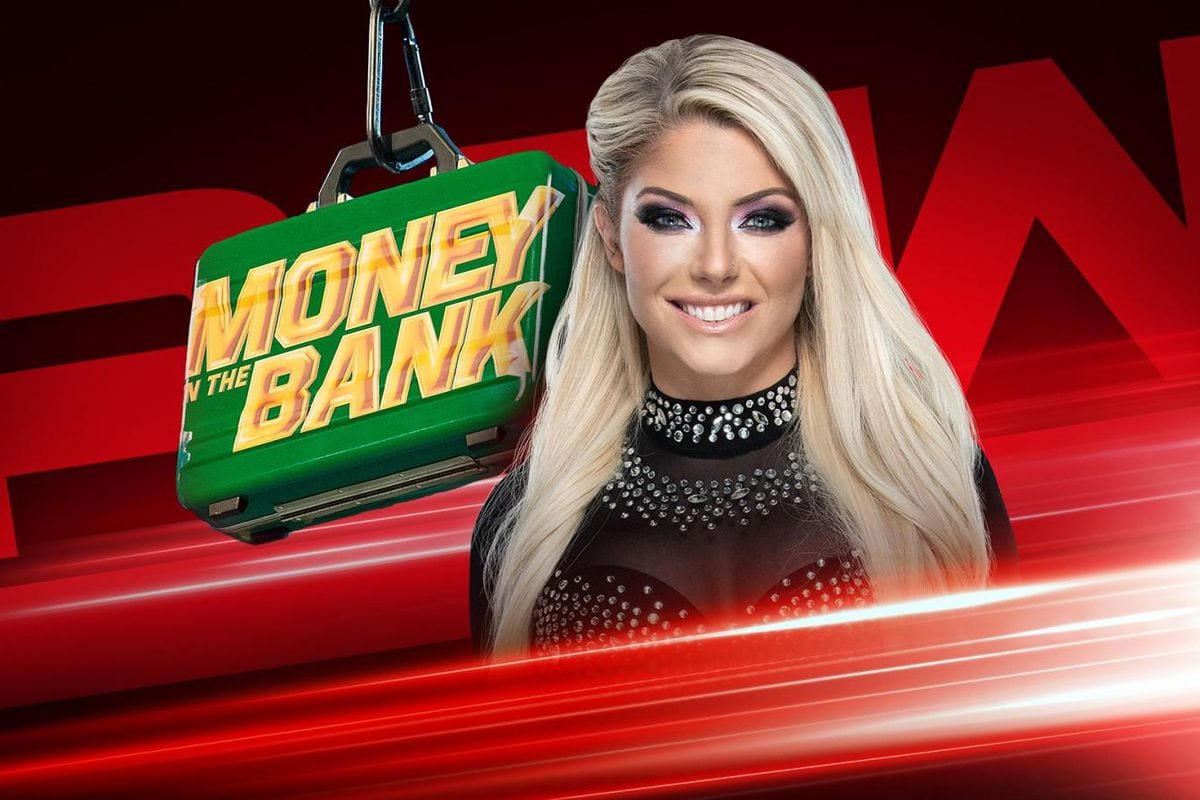 Welcome to Monday Night Raw for the final time…in April 2019.

Tonight’s show will see Alexa Bliss (inexplicably) reveal the participants for the Men and Women’s Money In The Bank matches. Well, on the Raw side at least. It’s hard to say who will be chosen but my guesses are Drew McIntyre, Baron Corbin, Ricochet, and The Miz. Although it wouldn’t be surprising to see Bobby Lashley, Sami Zayn, or Samoa Joe in there. As for the women’s match, I’m guessing Dana Brooke, Naomi, and Ruby Riott.

Elsewhere on tonight’s Raw, we get the first proper build towards Seth Rollins Vs. AJ Styles for the Universal Championship. This feud is a little surprising because it either results in AJ’s stock being hurt by losing, or Seth dropping the title quickly. Especially considering it’s two babyfaces. A first opponent for Seth should probably have been someone like Lashley or Corbin, but at least these two should produce awesome matches.

And then there’s Bray Wyatt. Last week we saw Bray Wyatt return to Raw in the first ever Firefly Fun House segment. Bray was re-introduced as a creepy Mister Rogers type and it was glorious. I, like most others, shrinked away from the screen as soon as it came on and had no idea what to think. But by the end I was hooked. The more it sinks in the more it seems like a stroke of absolute genius. It remains to be seen where it goes from here and if WWE even stick with it, but fingers crossed it redeems Wyatt.

And that’s the preview for tonight’s Raw. Let us know what you’re excited to see by downloading the Ringside News app and following us on Instagram. Enjoy the show!

Raw opens with Alexa Bliss making her way out to the ring. She gets cheered by the fans before welcoming us to A Moment of Bliss. She reminds us that Money In The Bank is just under three weeks away.

This year’s event will once again feature two ladder matches consisting of eight men and eight women. She introduces the first Superstar participating in the men’s match:

He won the contract last year, and @BraunStrowman will again compete in the #MITB Ladder Match THIS YEAR! #Raw pic.twitter.com/UH0Ykmkwh7

Braun, the winner of last year’s match, comes to the ring. The second participant is Ricochet, while the third and fourth are Drew McIntyre and Baron Corbin. The former Raw General Manager walks to the ring, listing off his accomplishments. He reminds us that he has won the briefcase before, but Ricochet reminds him he failed at cashing in. McIntyre says that’s true, and Corbin lost to AJ Styles last week. He’s sick of outside forces costing him the big time. Ricochet tries to interrupt but McIntyre tells him to leave the business talk to the grown-ups. McIntyre accuses Corbin of stealing his opportunities and tells him he will drop him.

Strowman tells them both to shut up and says none of them have what it takes to stop him. Nothing will stop the monster in the bank. He says it’s time for a little preview, so why don’t they have a tag match right now. All four men ready for a fight as we head to the break.

Corbin tags in and chokes Ricochet against the ropes, slowing the pace. Corbin knees away at him before applying a chin lock. Ricochet fights up and punches Baron before being sent into the ropes. Ricochet flips over him before catching him with a head-scissor takeover. Ricochet kips up and dropkicks him down. Ricochet knocks McIntyre off the apron. Ricochet goes for a springboard on Corbin but gets hit in mid-air like a brick wall.

We come back from the break to see Corbin standing over Ricochet. Corbin elbows him in the chest a few moments. During the commercial break, McIntyre hit Ricochet with a massive back body drop. Corbin stomps Ricochet before taunting Strowman. Corbin sends Ricochet to the corner, but he runs into a boot. Ricochet then goes for a dropkick but McIntyre sidesteps it before throwing him out of the ring.

McIntyre goes for a sneak attack, but Strowman comes to Ricochet to cut him off. Corbin tries to attack Strowman from behind, but it doesn’t hurt him. Strowman chases Corbin around the ring but McIntyre takes him out with a huge Claymore Kick. Corbin gets Ricochet in the ring and picks up a two count. Corbin punches Ricochet in the corner before bouncing him off the top turnbuckle. McIntyre tags in and chops Ricochet down for a two count. McIntyre applies a modified arm bar and digs his forearm into Ricochet’s face. Ricochet fights up, but McIntyre takes him down with a tilt-a-whirl backbreaker for a two count. Corbin tags in and sends Ricochet to the corner. Ricochet responds with an enzuigiri, then hits a rolling dropkick.

Strowman and McIntyre are tagged in. Strowman hits two running shoulder blocks before avalanching him in the corner. Strowman clubs him in the chest to take him down before trying another avalanche, but he hits the ring post shoulder-first when McIntyre moves. Ricochet quickly tags in, and he attacks McIntyre.

McIntyre then hits him with a Glasgow Kiss. Corbin blind tags in on McIntyre and goes for Ricochet, but Ricochet gets away and tags in Strowman. McIntyre attacks Corbin from behind. Strowman tags Ricochet in before hitting Corbin with a Running Powerslam. Ricochet follows up with a shooting star press on Corbin for the win.

The Uso’s come to the ring full of piss and vinegar and their music stops but they look confused. Their music begins again and they try to get the fans singing along as they head to the break.

The good brothers make their way to the ring after the break, and cut a terrible promo about beating The Uso’s.

The Uso’s Vs. Gallows & Anderson

Jey Uso starts against Karl Anderson. They lock up, and Jey takes him down. Jimmy tags in and takes out Anderson. Anderson fights back and tags in Luke Gallows. Gallows punches Jimmy down, but Jimmy comes back with an uppercut. Jimmy avoids a big boot from Gallows, then pulls the top rope down to sucker the good brother out of the ring.

Jimmy looks for a jumps over the ropes, but Gallows punches him before. Gallows then throws him throat first into the middle ropes. Gallows takes Jimmy him down with a big boot for a near fall. Gallows then knocks Jimmy out of the ring. Gallows goes outside and sends him into the barricade as we head to the break.

We’re back and Gallows has Jimmy in a headlock. He makes the tag to Anderson and he hits Uce with a knee to the head. Anderson applies a chin lock but Jimmy hits a jawbreaker to escape. Anderson fires back with a back elbow for a two count. Gallows tags in, and they hit a back suplex/neckbreaker combo for a two count. Jimmy connects with an enzuigiri to create some space.

Jey and Anderson tag in. Jey hits a pair of clotheslines before kicking Anderson and giving him an uppercut. Jey catches him with a Samoan Drop before hitting a running hip attack in the corner for a near fall. Jey goes for an avalanche, but Anderson moves. Karl catches Jey with a spinebuster for a near fall. Gallows tags in, and they look for the Magic Killer but Jimmy runs in and hits a superkick to Anderson. Jey then superkicks Gallows. Jimmy tags in, and they hit Gallows with stereo superkick. Jey then hits Anderson with a plancha. Jimmy follows up with a top rope splash on Gallows for the win.

After the match The Uso’s show us a video of them backstage earlier today, in which they spy on The Revival shaving each other. They make fun of them but then Dash and Dawson come out onto the stage. Dawson says he and Dash are men and that means he has some body hair and considering his size, it’s scientifically impossible for him to reach his back. So he has no shame in asking his best friend of 20+ years for a little help. They call The Uso’s sick freaks and say they’re done with them for now, because they have a match later tonight.

Still to come, Rey Mysterio Vs. Samoa Joe, as well as Seth Rollins and AJ Styles’ contract signing. The Miz makes his way to the ring for MizTV.