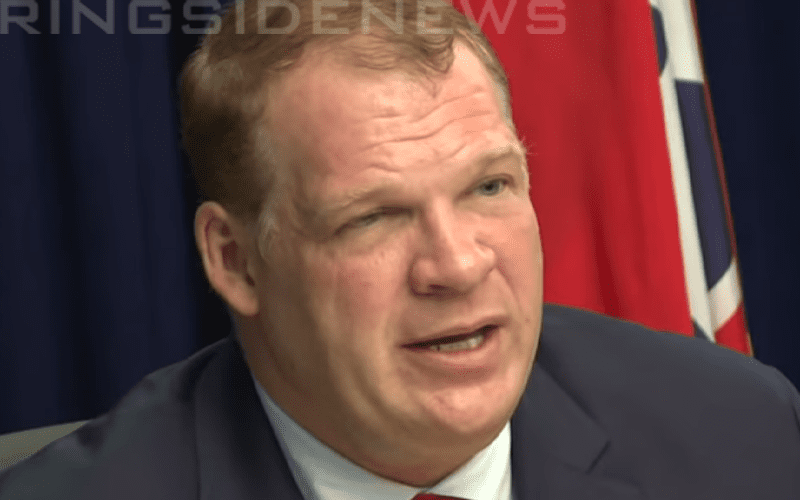 Kane hasn’t wrestled since his city of Knoxville, TN let him take part in an event in Saudi Arabia where he teamed with The Undertaker against D-Generation X. The Undertaker thought that was his last match at the time, but Kane apparently didn’t think that at all for himself.

In a recent video from WWE, they highlighted Kane and his new job as Mayor of Knox County, TN. He spoke about never thinking that he would travel the world as his career and after 25 years with WWE he realizes that “all good things must come to an end at some point.”

He decided to run for Mayor of Knox County TN about two years ago and he’s having a great time with that job. He likes feeling like he has an influence on where his community is headed. He wants to be able to give things to others which appealed to him and local government is “where the rubber meets the road.”

Things work much differently from the public to the private sector. In the private sector you can control things when you want to change them, but as Mayor he must act with transparency and take other public obligations in consideration.

When it comes to returning to the ring, Kane had a very famous saying that he fell back on.

“There’s a saying in WWE to never say never. Again, I love to perform. That last match as the Brothers Of Destruction against D-Generation X, two legendary teams. Two mythical teams. It didn’t turn out the way that The Undertaker and I wanted it to turn out. So never say never, maybe I’ll get back out there at some point.”

WWE donated a lot of money to Knox County, TN for allowing them the use of their mayor for the WWE Crown Jewel event. Kane isn’t going to hang up the mask though just in case another opportunity arises where he can get his hands dirty in the ring.