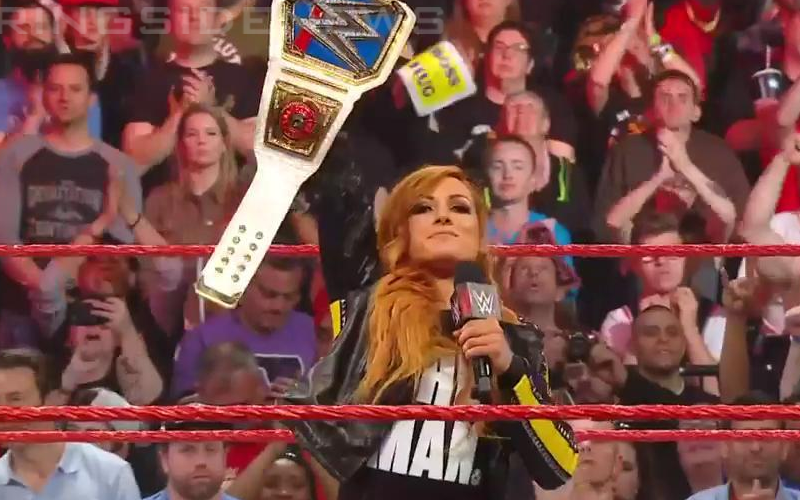 Becky Lynch is the double champ in WWE. As Becky Two Belts carries both titles into Money In The Bank, it is looking very likely that she will be dropping at least one of those belts eventually and it could happen on May 19th.

Lynch is slated to defend her RAW Women’s Championship against Lacey Evans and then she will fight Charlotte Flair once again to defend the SmackDown Women’s Title. This is all by design.

The Wrestling Observer Newsletter reports that the idea behind Becky Lynch defending both titles is for her to drop one of them at the end of the night without looking weak.

“Lynch working twice on the show seems like a gimmick to feature her, and it allows her to drop a title while having an excuse of being injured in the first of two matches.”

It wouldn’t be surprising at all to see Becky Lynch win both of her matches. Then whoever wins the Money In The Bank briefcase in the women’s match will come down and cash in to defeat The Man and take one of her titles.

If Lynch is set to be on the RAW brand as we previously reported then it would stand to reason that a SmackDown Live Superstar will be winning the MITB briefcase this year. Of course, we will have to wait and see because WWE could always swerve us and have Becky Lynch lose both titles to make her an ultimate babyface fighting yet another uphill battle to regain a championship status.