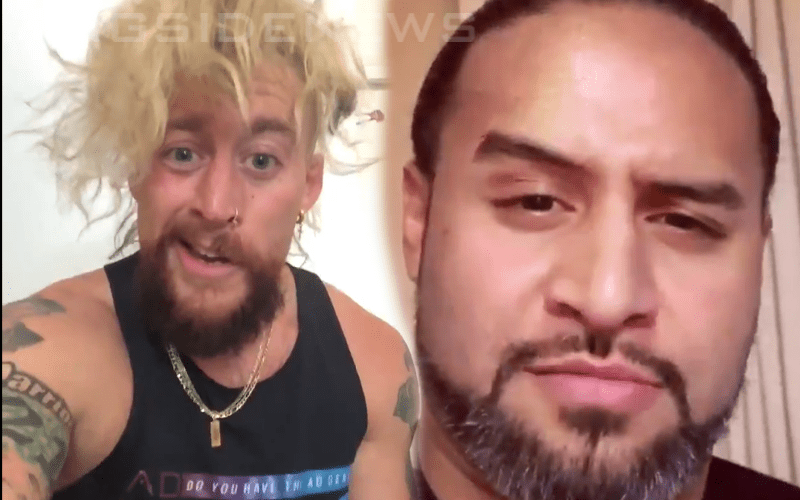 Enzo Amore and Big Cass jumped the guardrail during the G1 Supercard show at Madison Square Garden. This was intended to be a tester to see if it generated buzz and so far neither NZO or Cass have been booked for another ROH event.

Tama Tonga was there, but he wasn’t the object of Free Agent Z’s aggression. Instead, he just shook his head in disgust and walked away. It wasn’t until later when Tama Tonga spoke about how he really felt about the whole angle.

NZO fired back online last night in a long profanity-filled promo on the ROH and NJPW locker room. Apparently, they wouldn’t let him in and Tama Tonga spoke up online to take full credit for that snub. He also went on to call Amore “cancer” in the process.

“Whaddup Real 1? I’ll just address you straight up. You ain’t gotta call out the locker room. It was me. It was f*cking me. You know Real 1, you real f*cking idiot you know why? You know why we ain’t letting you in? Cause you’re cancer. We don’t want that to spread in our workplace.”

“You’re f*cking cancer. You talk about bringing in money? Ah sh*t… naw we’re talking about you killing our business. You’re a cancer. Not on my f*cking watch, bitch.”

Enzo Amore obviously saw this video from Tama Tonga. He did not appreciate being called cancer at all. So he fired back at Tonga in the best way he knew how by cutting a promo on him.

“You gotta be able to do better than that, bro. Come on, man. That’s it?! Using the C-word? The C-word? C’mon, ya little c*nt. Pick a better word, alright? Listen, I do what I do because it works! That’s why I don’t listen to nobody unlike you who you gotta listen to so many people just to go out through a f*cking curtain.”

“I can jump a guardrail and beat the sh*t outa people and you can watch it and do nothing and be mad at yourself. Don’t be mad at me, bro. I’m just doing what I do better than anybody else in the world, okay? That’s why I do things my way, my way. It’s my way or the highway and clearly you chose the highway because whatever you’re doing ain’t working, okay? Because you’re driving down the highway and you’ve had your directional on for far too long cause you ain’t ever getting over.”

We will have to wait and see if ROH signed NZO and Cass to a deal, but they might be dressing in the hallway if they do.