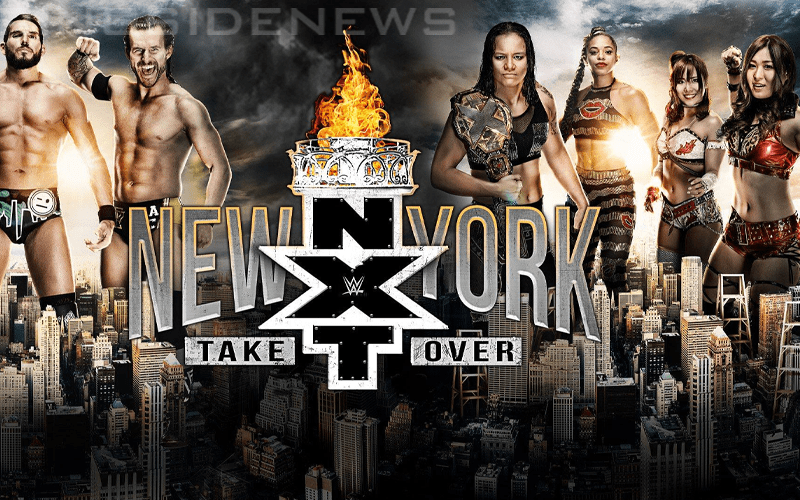 Welcome to Ringside News’ LIVE RESULTS of NXT TakeOver: New York. This will be a LOADED card so keep refreshing after the action kicks off at 7:00 PM EST

We are days away from WrestleMania and TakeOver is now on a Friday because the G1 Supercard sold out Madison Square Garden tomorrow night. Therefore, we’ll get the WWE Hall Of Fame on Saturday again like it was before TakeOver events were a thing.

This card was shaken up in a few big ways, primarily because Tommaso Ciampa injured his neck and needed surgery. He would have probably been able to work the TakeOver event, but Vince McMahon decided he needed to bring up the NXT Champion to the main roster for some reason.

Due to that change in plans, Johnny Gargano and Adam Cole will fight to take the title away from Vacant in a 2 out of 3 falls match.

There is also an interesting situation with Ricochet and Aleister Black because they will have been in 3 different title matches for 3 different WWE brands in the same week by the time WrestleMania is over. That will be quite an accomplishment. However, their main roster days might be upon us so a title win might just complicate things. Therefore, the War Raiders might remain undefeated.

We also have to address the possibility that WWE might need Shayna Baszler on the main roster soon as well. WrestleMania is an exciting time of the year and you never know who might be introduced in the Superstar shake-up that is coming up very soon.

There is a lot of drama throughout this entire card. You can check out the match listing below and check back when the show kicks off and we’ll get this going.

The War Raiders got some nice Vikings to lead them to the ring. Ricochet and Aleister were incredibly over as well. The Brooklyn crowd knew every word to Black’s theme song too and it was pretty epic.

Black and Rowe started out and after exchanging some moves, Rowe took control and held back from delivering a devastating punch when he had Aleister pinned down. Then Black returned the favor later on by holding back a kick.

Rowe slammed Hanson on Ricochet after The One And Only was taken down followed by a body slam and an armbar from Rowe to Black. Aleister blocked getting slammed on again by the War Raiders and kicked Hanson before Ricochet took the tag.

Ricochet hit a springboard lariat for a 2 count after a flurry of offense. Black took the tag and maintained control of Rowe as he tried to work on him.

The crowd popped huge out of nowhere and chanted, “You deserve it!” a few times while looking off to the side. So I can only imagine what happened there.

Ricochet and Hanson took takes and the big guy took control with a sidewalk slam and a crossbody. Black and Ricochet ended up in the corners and they took a bunch of running splashes from Hanson.

Then Ricochet caught Hanson and hit a belly to belly suplex and the crowd popped huge! That was impressive.

Rowe and Black started slugging it out and then Black caught Rowe’s knee, but Rowe landed one and then so did Black. Rowe kicked out of a pinning German suplex from Aleister and the crowd popped again.

Then Hanson and Ricochet started trading moves including a handspring off the ropes into a back elbow. Ricochet kicked out at two after that. Then Hanson climbed up to the top rope only to be pulled off of it.

Rowe nailed a knee to Ricochet’s mouth and then crushed him with Hanson before the War Raiders pulled off a sick double team move. They both covered Ricochet and Black broke up the pinfall with a double stomp off the ropes.

Black sent Hanson to the outside and hit a dive. Rowe hit a dive on Black and then Ricochet hit a corkscrew tiger drop on Rowe followed by Hanson climbing to the top rope and taking everyone out with a cannonball somersault dive.

Rowe and Ricochet returned to the ring and Ricochet hit a Superkick. Black tagged in and took Hanson off the apron. Then he focused on Rowe where he nailed a Black Mass followed by a shooting star press from Ricochet.

Hanson barreled through Black and caused them to break up the pinfall. Ricochet missed another 630 attempt and then Black was taken out on the outside by Hanson with a clothesline.

Hanson got tagged in and Ricochet hit a Superkick. Then the War Raiders hit the Thor’s Hammer followed by the Fallout for the win.