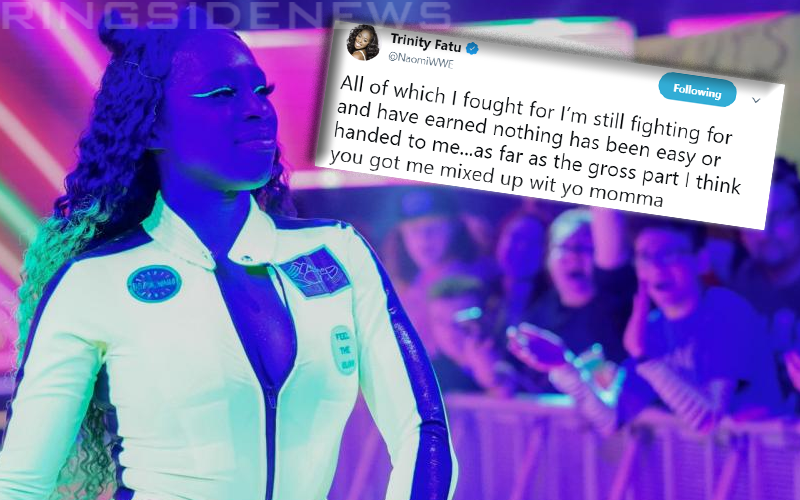 Naomi has stopped being quiet about her position in WWE. Drew McIntyre might shoot absolute fire at the social media complaining, but The Glow is all for it. After all, it is a free way to make her opinion known.

One “fan” blasted Naomi on social media and made several solid points about why she really shouldn’t be complaining when compared to other Superstars. She just couldn’t hold back from critiquing his critique. This guy said of Naomi:

“This is by far the grossest ‘Superstar’ WWE currently has. Horrible in the ring, horrendous on the mic, and disgusting to look at. This bitch out here complaining how she doesn’t do sh*t, yep, like you were not doing sh*t winning the belt at WM in your hometown. Or, costarring in a movie. Or, being on SmackDown 3-4 times a month. Or, traveling across the country for house shows. Or, literally having cameras follow you on a daily basis to be turned in to a show hundreds of thousands of people watch. Yeah, looks like you’re just sitting. Shut up.”

Naomi fired back saying that she earned all of those good things that he listed. It has nothing to do with how she is being treated on television. Then she took an opportunity to get a little personal by throwing in an insult directed at this fan’s momma.

Naomi is currently slated for the WrestleMania Women’s Battle Royal Match. She would have much rather won the #1 contender’s match on SmackDown Live last week to earn a much better WrestleMania match. Instead, Charlotte Flair won and now the WrestleMania main even will have one more gimmick.

This is the point Naomi was trying to make and it looks like she is going to stick to her guns until things turn around for her.