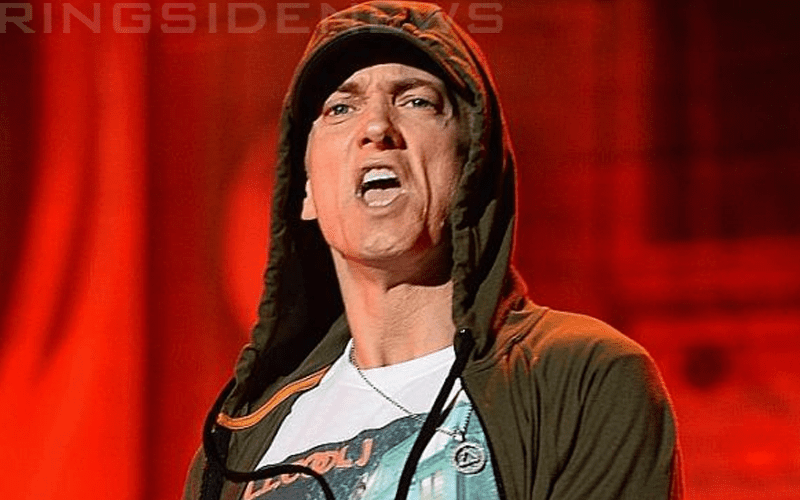 Eminem is currently on tour overseas and performed in front of a packed house in Australia last night. As Slim Shady was rapping for Aussie stans, a report came out that he and WWE had struck a deal. The Marshall Mathers camp was not happy about this at all.

The report said that Eminem signed on to help put the WWE 2K20 soundtrack together and it would possibly include an appearance from the Rap God on SmackDown Live once they move to Fox. This did not add up for some fans who know how Eminem operates and it was solidified once Mathers’ camp released a statement to deny the repor.

Sean Ross Sapp initially broke this story. Once a statement of denial was released by Eminem’s camp, he put it all out there on social media.

The hilarity of us getting threats OF legal threats for publishing a story featuring information that Eminem’s group, 2K, management WWE didn’t want out there. We didn’t sign any NDAs. We are free to report that information.

If Em’s team pulls or pulled the deal I’ll feel bad for those who put it together, but yep – a deal was agreed upon today for all the things I mentioned, regardless of who’s rep is saying what.

Threatening to THREATEN legal action? Send us the C&D, don’t give us the review copy or credentials and move on. A story got leaked, there’s damage control because people are mad.

Apparently, Eminem’s camp is “threatening to threaten legal action” against him due to this report. If non-disclosure agreements were signed then this is understandable, but Eminem’s people don’t seem to be budging on story.

If Eminem’s people pull out of the deal then we may never know, but WWE tried to get Eminem to participate in their programming over a decade ago and he wasn’t interested.

We will keep you updated on this on-going story as more news is made available right here at Ringside News.