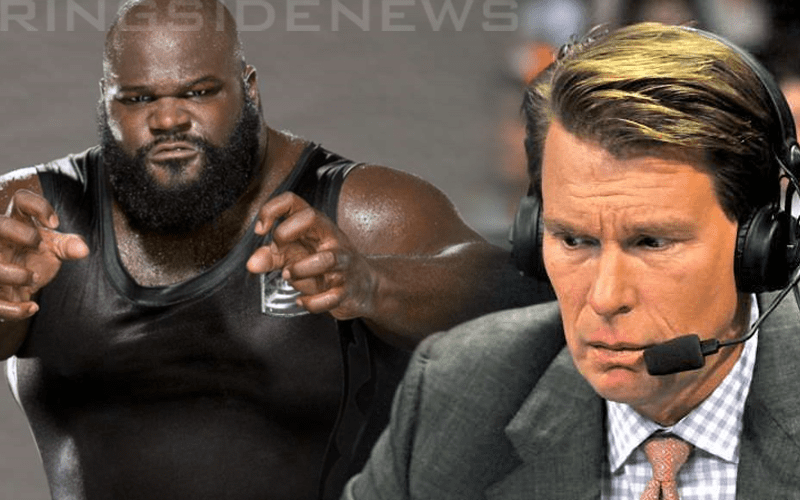 Mark Henry is a WWE Hall Of Famer who the entire WWE locker room respects as a leader. He is also currently a locker room enforcer with the company.

There have been many stories to float around about JBL and his backstage bullying. One person who planned on doing something about it was Mark Henry, that was before Owen Hart got involved. During The Ross Report, Mark Henry shared a story about how Owen Hart stepped in to stop him from beating up Bradshaw.

“I was having a disagreement with a wrestler that we both know and love and I wanted to fight. And I think I told [Ross] that I wanted to fight him. I didn’t want to get fired. I was like, ‘I’m going to beat him up and don’t fire me.’ And [Ross] was like, ‘well, if you beat him up, I will have to you and I may have to fire you.’ And I’m like, ‘well, sh*t. I can’t win!’ Owen came up to me and said, ‘listen, don’t get mad. You get very entertaining when you get angry. I like to see you angry too as long as you aren’t angry at me.'”

“I realized I was putting a show on and me fighting somebody that’s my peer would not be good. It wasn’t going to look good anyway. And this guy, by the way, was the artist formerly known as Justin ‘Hawk’ Bradshaw and I just wanted to whoop him and Owen said, ‘don’t do it.’ He said, ‘the next time you see John by himself, just walk up to him and say, ‘John, I don’t appreciate you picking on me and I wish you would stop.’ And if he says he won’t stop, then you just tell him, ‘well, the next time that I see you by yourself like this, nobody’s around, I’m not going to be screaming and yelling. I’m just going to take the opportunity to let you know that I don’t particularly like it and it might not be with words.” And he taught me how to communicate and I love that dude. He was my brother because he helped me keep my job, one. He taught me how to relate to people in the locker room and nobody got hurt. That’s a lost art and there needs to be more Owen Harts in the locker room.”

If Owens Hart wouldn’t have stepped in, Mark Henry could have found himself tangling backstage with someone who had great political pull in JBL. His Hall Of Fame career could have been cut short and we would have never been introduced to the House Of Pain. Thankfully, Owen Hart was around to sort things out.