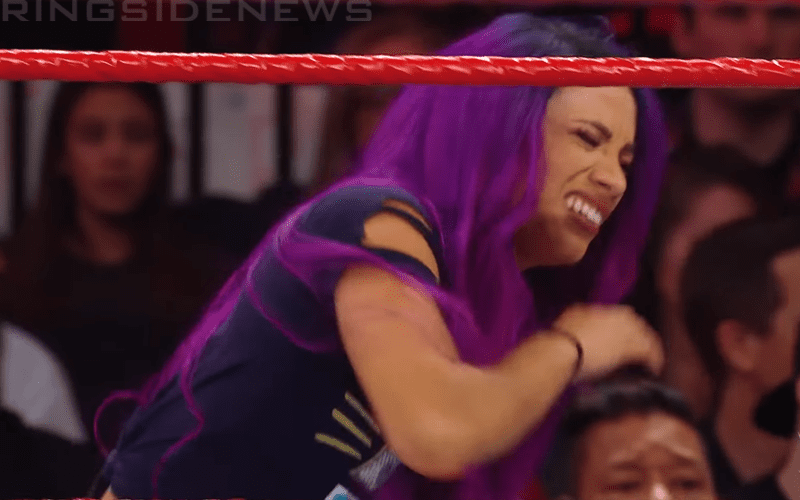 Sasha Banks is injured and she was slated for medical testing on Monday. This is why she didn’t work the WWE house shows over the weekend. It is said she suffered this injury during her Raw Women’s Title match against Ronda Rousey at the Royal Rumble event.

The Boss n Hug Connection set to face Nikki Cross and Alicia Fox on Raw this week. The winners would be inserted in the WWE Women’s Tag Team Title match at the Elimination Chamber.

Before The Boss n Hug Connection even breached the curtain for their match on RAW, Nikki Cross and Alicia Fox jumped them from behind.

Nikki Cross and Alicia Fox laid a beating on Bayley on the ramp, but they didn’t do anything to Sasha except kick at her without making much contact. After tossing Bayley down the ramp, Banks laid motionless and WWE officials had to attend to her.

During their match, Banks stayed on the outside throughout the entirety without tagging in. Bayley got the win after Sasha pulled Bayley out of the way allowing Nikki Cross to slam into the ring post to cause a distraction, but that was the extent of The Boss’ physicality.

Dave Meltzer noted on Wrestling Observer Radio that Banks is cleared to a certain extent. However, the fact that she got on the ring apron and didn’t get involved very likely means that WWE hasn’t granted her a full medical release just yet.

“Sasha Banks was banged up, they took her out early and Bayley worked the entire match. [Banks] had to have been cleared because if she weren’t they wouldn’t let her at ringside.”

Winning their match on Raw means that Bayley and Sasha Banks are set for another Elimination Chamber match. They were both in the first-ever Women’s Elimination Chamber match, but not as a team. We will have to see how things might be different in February 17th. In the meantime, The Boss n Hug Connection seem ready for the challenge, let’s just hope Banks is able to heal up in time and receive a full clearance.