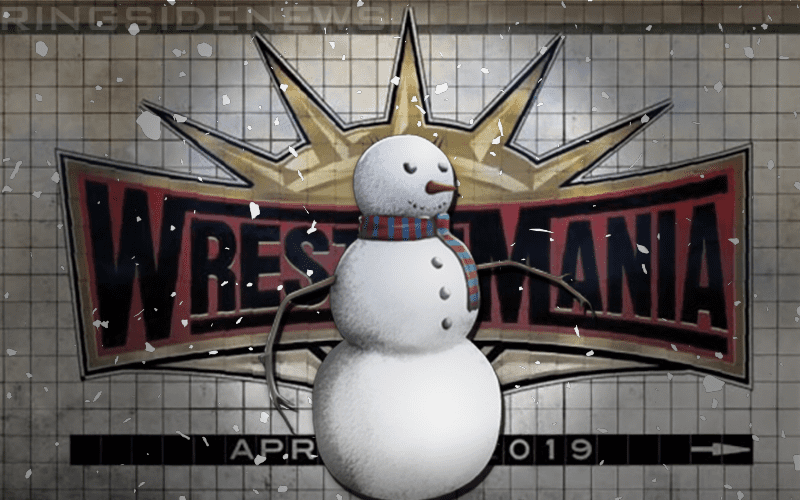 WWE has been very lucky so far when booking WrestleMania. They have yet to experience a snow storm. However, most of the country is having a lot of snow right now meaning April in New Jersey could be a cold show to attend.

A lot can happen with the weather in two months, but Dave Meltzer said on Wrestling Observer Radio that WWE’s plan in case it snows during WrestleMania is to carry on with the show as promoted.

“They’re gonna go on with the show just like an NFL game. I mean Vince has talked about it. The NFL plays in blizzards. There probably won’t be a blizzard in April. It could be really cold, it could possibly snow, probably not but it’s possible.”

“When you run an outdoor show there’s always the risk of an outdoor show. I mean that’s just how it is no matter what. So that’s why a lot of people don’t wanna do outdoor shows unless it’s like you know in LA or Las Vegas or something it’s not as much of a risk. In a lot of parts of the country it’s a big risk.”

WWE installed heaters on the ring posts in the past to make sure that their wrestlers didn’t freeze in the cold. This could very likely be their plan this year as well for the show of shows. There will also likely be some sort of a roof constructed above the ring not only for lighting, but to protect the ring from inclement weather.

WWE takes much less of a chance with snow when they book events on the West Coast, but MetLife Stadium won the bid for WrestleMania 35. WWE is aware of the risk they take when booking an April show in New Jersey. So no matter if it is a blizzard or a clear sunny day, WrestleMania 35 is going to happen just like an NFL game.