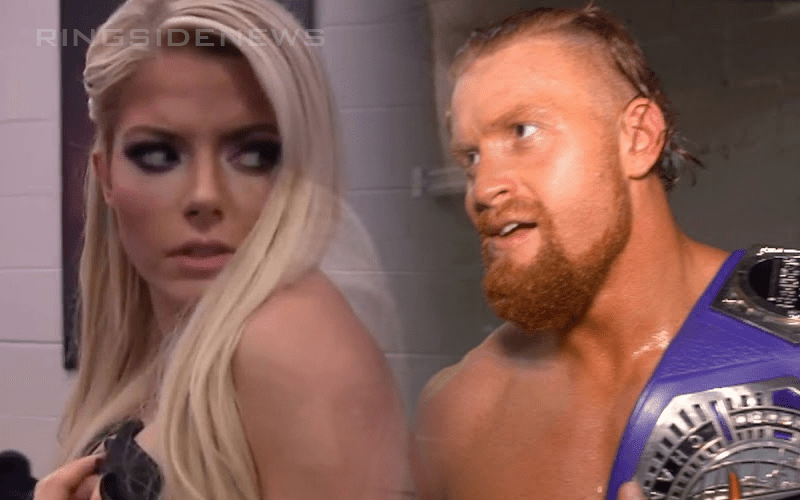 Alexa Bliss and Buddy Murphy are a WWE couple that has been able to make it work. It can’t be easy for them though because Bliss is on Raw and Murphy is on 205 Live traveling with the SmackDown Brand. Still, the two are together even though they might only see each other once a month.

Murphy spoke to Chasing Glory about his relationship with Alexa Bliss and how they are able to make it work. He doesn’t view this situation as permanent at all so that helps them make it through. The help Bliss is able to offer Murphy is also invaluable as they both continue as WWE Superstars working for different brands.

“Complete opposite schedules. Absolutely it is [hard]. Relationships are hard if you see someone five or seven days a week, you know what I mean? It’s one of those things where you just kinda to me — it’s the cards I’ve been dealt for now. It’s only for now.”

“So I can look at it like that, but you know I support her 110%. I watch all of her stuff. I send her my promos like, ‘What did you think of this?’ Like I go to her. She’s the one who taught me how to speak. She’s helped me heaps. Like I try to help her in the ring she tries to help me with character stuff.”

“There were times in NXT when I hated wrestling she would try to tell me stuff and I didn’t want to hear a bar of it because I kinda checked out especially after that thing with me and Blake, that ended and we kinda came back sporadically. We’re broken up. ‘Oh you need a tag team?’ and we kinda showed up and then we find ourselves not being on TV and we didn’t know why. We were trying so hard.”

Buddy Murphy’s situation could be a lot easier with Alexa Bliss if they could be on the same brand. You never know if Murphy could be the next 205 Live to get moved over to one of the main roster brands either.

For now, Buddy and Bliss are going to make it work as they know a time will come when they will see each other much more often.