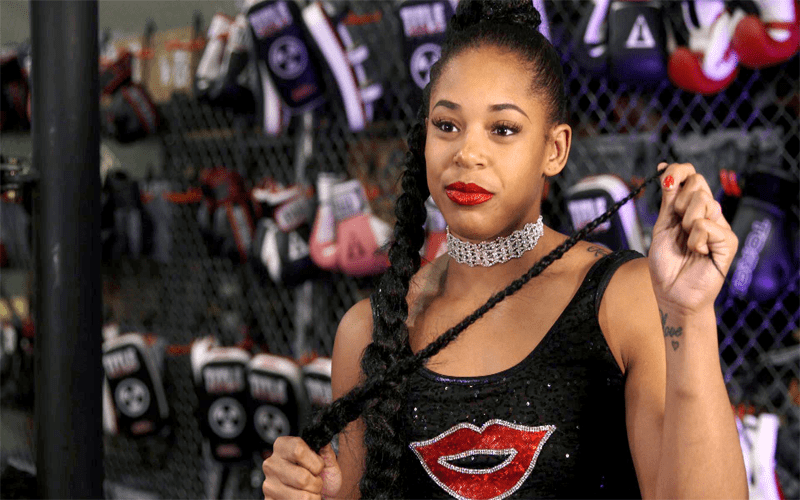 NXT Superstar Bianca Belair is closing in on her title shot against Shayna Baszler for the NXT Women’s Championship. Belair is much more than just your average wrestler, as evidenced by her character work, self-made attire and her hair. That’s right, her hair.

That won’t be surprising to any viewer who has seen Belair perform. Her lengthy hair is often used to whip opponents around the ring. Given that it is a physical part of the body, the referee is unable to stop the match, meaning that Belair is a walking weapon ready to strike.

The NXT Superstar was interviewed by Jim Varsallone of the Miami Herald ahead of her Championship match against Baszler. Belair was first asked to give an insight into what it is like to perform for NXT and train at the WWE Performance Center in Orlando, Florida.

“Being in NXT it’s an experience like none other. I’ve never had an experience like this. Growing up I played almost every sport in the book, I was in track, basketball, soccer, cheerleading, and CrossFit. Even though I feel like I have a great background that grounds me. I’m able to pick up all things very quickly, I’m coachable, but with that being said wrestling is nothing like anything I’ve ever done before. It’s a skill in its own. It’s an art. It’s a craft. Stepping in the Performance Center two and a half years ago for the first time I barely knew anything and started from the bottom and worked my way from the top. I’m just so grateful to be surrounded by amazing coaches, amazing facility, and everything is provided for us. It basically just sets us up for success. It’s been a great experience being here and NXT.”

Belair would move on to the topic of her hair, naturally. She was asked to give fans an insight into the length of her hair and how long it takes to braid it in preparation for matches.

“I’ve never actually measured the hair, but it’s basically almost to the floor. It’s pretty long. It almost touches, I would say it’s between my ankle and my knee, so somewhere mid-calf, so that’s the length of my hair. It’s pretty long. Preparing the hair for every match is a task. I’m not even going to lie about that. It’s definitely a task. I’m probably one of the last girls in the back to get ready. It’s a lot I put into the braid. It’s not something that everyone can do and that’s what makes it special. All the work I put in the braid is totally worth it, so I’m not even going to complain how much time it takes to do the braid.”

Finally, Belair recalled how she developed the hair whip move and when she first used it. According to the undefeated NXT Superstar, she was set on keeping it after first talking to her boyfriend (now husband) Montez Ford and NXT coach Sarah Stock. She first used it in California against Ruby Riott- who, at the time, went by the shortened name of “Ruby Riot.”

“When I first started, I was trying to figure out who I wanted to be, what I wanted to do, and how I was going to stand out. I had an idea of wearing a long braid. I looked around and saw no one else had a hairstyle like that. I was going back and forth, ‘Do I want to just wear my hair down, have waves, curls, like everyone else or do I want to wear this braid?’ So, my husband (Montez Ford) was the one who told me ‘No, you need to keep that braid. It makes you stand out.’ He pushed me towards that. At first, it was just this thing of just standing out and I was actually in the ring, he was watching and he told me that, ‘I could probably use that braid in the ring.’

“One day I was in the with Sarah [Stock], my [NXT Coach], she asked me, ‘Can you hit [your opponent] with it?’ That was the first time I tried it and that’s when I realized I can actually use this thing in the ring. The first person I actually used it on was Ruby Riott in California. It was the first time it ever made the noise. That’s when it all started and has never stopped since then.”

You can see the whip first being used in the video below:

Do you like the hair whip? Will Belair defeat Baszler at TakeOver? Let us know your thoughts, opinions, and reactions in those comments below.

With H/T to WrestlingInc for the transcription.