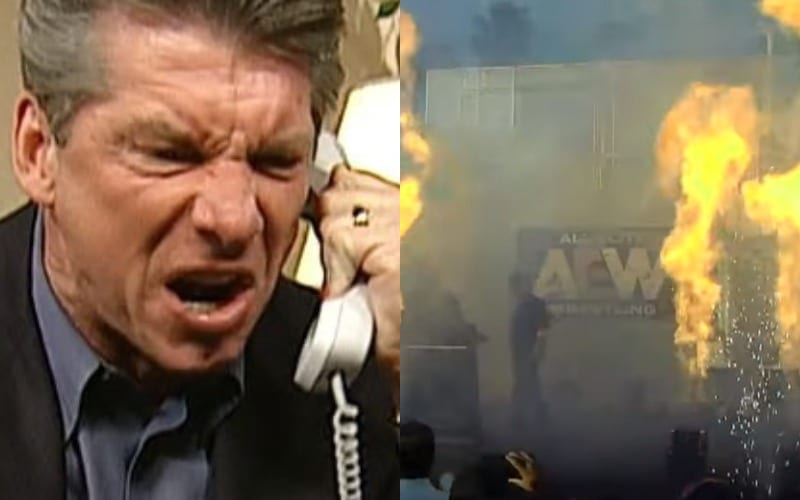 All Elite Wrestling made a big statement with their rally in Jacksonville on Tuesday. During the rally, Pac showed up and announced his involvement with the new company. The main event was Chris Jericho’s appearance where he proclaimed that he is ALL IN with All Elite.

Jericho appeared on Busted Open Radio where he discussed the rally in Jacksonville. He said that it wasn’t in the same city as WWE by accident and then made a joke about how Vince McMahon probably reacted to the pryo they released at the conclusion of the historic rally.

“I was laughing because that fireworks display that they set up on top of the Jacksonville stadium and it was like the end of a WrestleMania or the beginning of a WrestleMania. I had no idea, it was a huge pyro display.”

“I just know that in that Jacksonville arena somewhere the Old Man was in there going, ‘WE GOTTA SHUT THAT PYRO OFF DAMMIT! TRYING TO DO A MEETING HERE! TRYING TO RUN A SHOW!'”

“But yeah, it was very strange and obviously no that it was run on the same day WWE was in Jacksonville. It’s one of those things that if you’re gonna send a message and you’re going to do things a certain way, do it the right way and that was making a real statement.”

Jericho said this doesn’t mean that there is a war with WWE, but they want to exist in the same market. He also revealed details of a conversation he had with Vince McMahon about making the jump. Therefore, McMahon wasn’t caught completely off-guard.

You never know how WWE could respond to the upcoming All Elite Wrestling company, but they are serious about changing the business. Hopefully, giving fans more options will cause another creative surge with renewed interest that will benefit everyone involved in the industry.