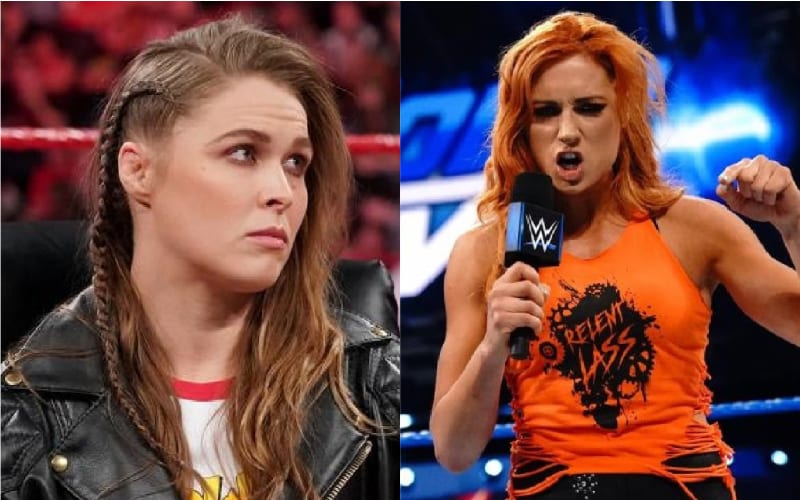 Vince McMahon told Charlotte Flair and Becky Lynch that if they have a problem with Ronda Rousey, then they will have to take it up with her. Rousey obviously heard this and had something to say.

“TLC wasn’t revenge, it was a warning. @charlottewwe @beckylynchwwe You’re both lucky I let you off so easy. Asuka deserves to be champion more than either of you cheating cowards. And @beckylynchwwe says SHE came at ME head on!? @beckylynchwwe has only ever attacked me when my back was turned – that’s some more #BackwardsBullsh*tBecky. If you and @charlottewwe are smart you’ll consider the score settled, learn this lesson, move on…. and don’t provoke me again,” Rousey spouted off on Instagram.

Becky Lynch didn’t appreciate being called a cheating coward. The Man doesn’t really take too kindly to much smack talk, to be honest. “I remember now you said I attacked you with your ‘pants down,’ you little weirdo. Not going to lie though, I did walk in to your dressing room and see an ass – but it was fully dressed,” Lynch said. She also included a pretty funny little meme of her holding Rousey in a Disarm Her backstage in the RAW dressing room.

To put a little cherry on top, Lynch then encouraged Charlotte Flair to go ahead and respond to Ronda Rousey as well because she copies her any other time. This feud could be getting interesting and just might result in a triple threat match at WrestleMania.

I remember now you said I attacked you with your “pants down,” you little weirdo. Not going to lie though, I did walk in to your dressing room and see an ass – but it was fully dressed. pic.twitter.com/NTAYxf745f

Hey Charlotte, I’ve replied to Ronnie now, so you can come along behind me, copy me, and put wooo at the end. You know like you do in work.