Will Ospeay is one of the most exciting acts on the indie wrestling scene, but you’re not going to see him in WWE anytime soon. He is currently under contract elsewhere, but if you ask Ospreay, he’s on the same journey as former WWE Champion AJ Styles.

After all, Styles spent a decade in TNA and working the indies for even longer before coming to WWE. Styles also had an impressive run in New Japan Pro Wrestling. But he eventually found his way to WWE where history has told how successful he has been.

Ospreay was offered an EVOLVE contract a couple of years ago from Gabe Sapolsky via Paul Heyman. It was an emotional night for Will, but he ended up turning down the EVOLVE deal. Only time will tell if Ospreay will make it to WWE eventually, but he could be much closer if he would have taken the deal that was offered to him previously.

Instead, Ospreay decided to take his own path and continue working away from WWE. An EVOLVE deal could have brought Will into WWE at the cusp of 205 Live, but he continued to work his own style on the indies and now he is currently out of action from an injury that he sustained by performing a dangerous spot.

Hopefully, Ospreay will be able to get back to action soon. But if you ask him, he is on the same journey as AJ Styles. While watching the AJ Styles 360 special on the WWE Network, The Aerial Assassin commented on an Instagram story: “It’s so strange watching AJ’s 360. Just taking that same journey.”

Whether or not you agree with Will Ospreay is another story. But he certainly seems confident enough about the fact that he will someday be following AJ Styles presumably to WWE by the time his career is said and done. 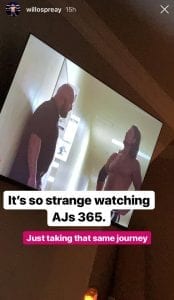