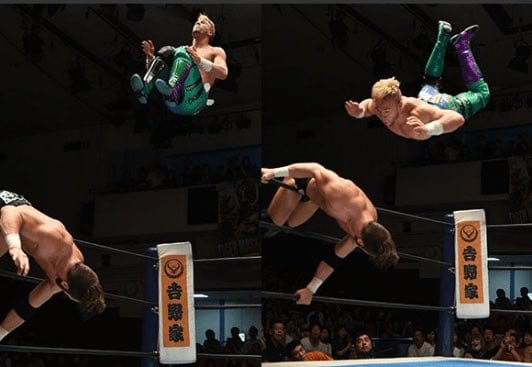 Will Ospreay is one of the world’s most talented jr heavyweights which led Paul Heyman to extend an EVOLVE contract to him a few years ago. Of course, Ospreay didn’t accept the deal sent from Gabe Sapolsky but he certainly didn’t make himself scarce.

If anything, Ospreay has launched himself into a new platform of his career — and then he kept diving off of it. The Choas member has received plenty of warning from fans, critics, and other pro wrestlers. They want him to be healthy and stop taking such insane risks — they have warned that it could leave him injured.

It looks like Will kept doing things his way and now he’s injured. Ospreay had to miss the NJPW Power Struggle event meaning his injuries have to be pretty bad. But that’s not going to get Ospreay down as he heals up at home.

The Aerial Assassin tweeted out a picture of himself in the middle of a flip in a NJPW ring with the caption reading: “Take risks.” This is the opposite than what he’s been hearing for quite a while from people who care about his career continuing and him being able to wrestle for years to come. So it’s quite interesting.

The 25-year-old indie wrestler hasn’t wrestled since October 14th, but hopefully, he’ll be back soon. In the meantime, it looks like his mindset hasn’t changed much.