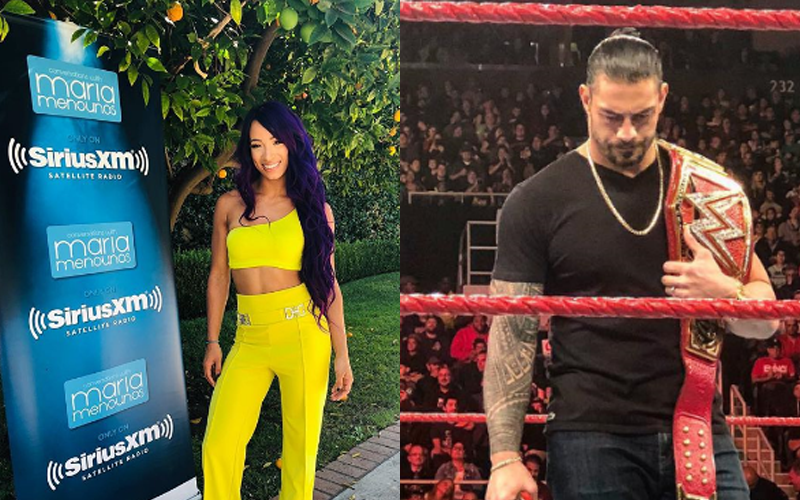 Roman Reigns made the difficult announcement to go public on RAW this week with his re-emerging leukemia, as he prepares to fight off the nasty, aggressive disease for the second time. He has caused the entire wrestling industry to come together in support.

RAW Superstar Sasha Banks is good friends with “The Big Dog,” and was backstage to embrace him in a hug at guerrilla as Reigns said his final goodbyes before leaving the arena. She made an appearance yesterday on Conversations with Maria Menounos, where she spoke in depth about her reaction to the news, and how she found out in the first place.

Banks had the following comments on the matter:

“I didn’t know, and I don’t want to cry ’cause he’s so…he’s very special, and I’m still shaken from that news.

“I remember getting ready for my match and walking backstage and everyone just stopped and was watching some kind of screen of any sort that they could see, and I’m like ‘what’s going on? what-what did he just tell us?’

“Everyone found out with that promo, the whole world. No-one backstage knew. I ran to guerrilla ’cause I’m like- he is the strongest, most amazing man I’ve ever met. He’s taught me so much since I’ve been on RAW.

“Just to see the outreach on Twitter too of people just wishing him well, knowing that people are gonna pray for him, I know he is going to get through this because he is so strong.

“To know he has been battling with this and didn’t tell a soul and he is legit. He is a leader, he is everyone- everyone looks up to him. There’s no bad word[s] that anybody can say about him, because he is the hardest working person I’ve ever met, and I wish him all the best, and I know he’s gonna overcome this.”

You can listen to the comments through the video below:

Banks is set to team alongside Bayley and Natalya against The Riott Squad at Evolution, which takes place at the Nassau Coliseum in Uniondale, New York this Sunday.

Let us know your thoughts, opinions, and reactions to this story in those comments below.