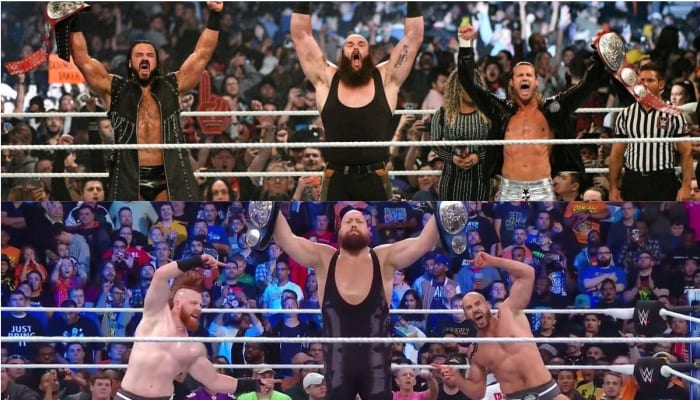 Braun Strowman still has the Universal Title in his sights as he battles Roman Reigns and Brock Lesnar at Crown Jewel. Roman said on Raw that Braun will be moving to the back of the line if he loses and it’ll be interesting to see if that happens, but whatever Strowman does, he will be a Monster walking on his own.

Drew McIntyre’s Claymore Kick to the Monster Among Men in the closing moments of Raw this week meant that their stable of 3 was no more and it looked as though they were kicking Braun out… literally.

But it seems that when WWE takes away, they form another almost identical team the next night on SmackDown Live. Because The Big Show came down and assisted The Bar in winning the SmackDown Tag Team Titles making another tag team with a monster combo, only it’s on the other brand.

Strowman saw SmackDown 1000, and hopefully, the ratings will show that he was not alone. He simply commented “Savage” which might have been interrupted a couple of different ways. Either he’s happy for this new team or he’s making a comment about WWE’s cut and paste booking. Either way, it was a great nod to his former Raw Tag Team Champion partner Nicolas who also threw in a great dig.

We’ll let you decide what The Monster Among really meant and please let us know what you think too because we’re very interested in this.