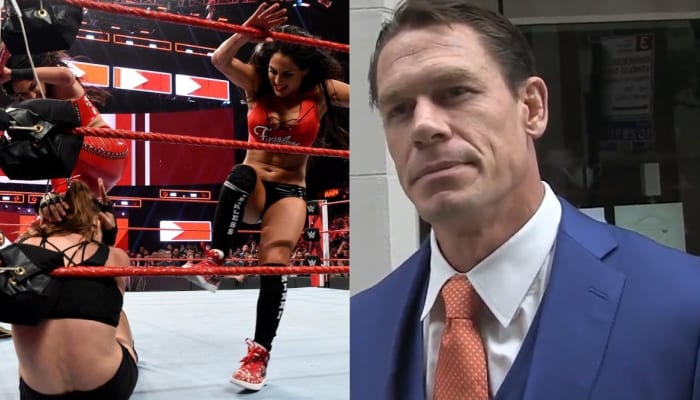 John Cena and Nikki Bella were together for so long some fans might not remember them not being a couple. But their recent breakup this summer sent shockwaves through the pro wrestling and entertainment world.

Adam’s Apple recently caught up with John Cena on the streets of NYC before his Today Show appearance where he was asked about Nikki Bella’s recent heel turn on Ronda Rousey and whether he thinks it’s a good idea for Nikki to face the former UFC Bantamweight Champion at WWE Evolution.

“It sounds entertaining,” Cena replied diplomatically. He certainly knows how to answer a tough question and he soon let Adam move on to the next subject. Unfortunately, the next question he received was: “All the women want to know are they going to see you on a dating site anytime soon to which Cena had a pretty interesting reply.

“I thought with Bumblebee coming out around Christmas that Bumble would be a good way to promote that, but I don’t know. We’ll see.”

As time goes on Cena will probably find a new love interest, but at this point in his career and life, he’s so busy that might prove to be a challenge. At least he’s able to make jokes about it as he moves from one blockbuster to another as his Hollywood career continues to grow.