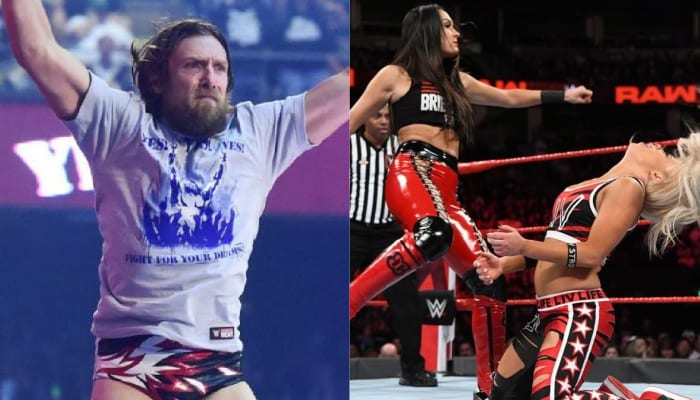 Daniel Bryan is a very supportive husband and his wife Brie Bella has been there for him through some very hard times in his life. She stood by him through his forced retirement, depression, and recovery from injury. Now it’s his turn to have her back as well.

Brie Bella accidentally injured Liv Morgan on Raw last week. Let’s hope Morgan is able to pass the Impact testing as part of WWE’s concussion protocol because people have been coming down on Brie pretty heavily.

“I am proud of how strong my wife is. After accidentally injuring Liv Morgan last week, the first time Brie’s ever hurt another performer, she’s been subject to a constant barrage of social media attacks. Almost every wrestler has accidentally hurt someone…” Bryan tweeted out.

He also continued in a string of other tweets to explain himself which you can read below.

Bryan said this was Brie’s first time hurting another performer in the ring and she’s received a “constant barrage” which we can see too because we read our timeline and responses to everything.

Only time will tell if Morgan is able to heal up quickly, but we are really crossing our fingers for everyone involved. After all, Bryan should know a thing or two about concussions because it was due to problems just like that which caused his early retirement.

But the overall message from Daniel was a call to end cyberbullying. After all, Brie has received a ton of heat from fans so much so that she might be a bonified heel at this point. But it’s still not okay to go so far, after all, mistakes happen and pro wrestling is never a guaranteed safe workplace.

I am proud of how strong my wife is. After accidentally injuring Liv Morgan last week, the first time Bri’s ever hurt another performer, she’s been subject to a constant barrage of social media attacks. Almost every wrestler has accidentally hurt someone…

but rarely do you see this kind of hate when it happens. For example,
I concussed Randy Orton in 2012 after hitting him with what was supposed to be a chair to the back. Unfortunately part of the side hit him in the back of the head, and he was forced to miss a PPV…

In 2009 in our last match against each other, I concussed Nigel McGuinness after doing a dive into him in the crowd, where his head hit the floor. And there are others…

As for the Yes kicks, two weeks ago I accidentally kicked Andrade directly in the head due to a miscommunication on my part. I feel fortunate that he was ok, because there are few feelings worse than hurting someone…

Despite all of that, never did I receive the backlash Bri did this week. With all the negative things said about my wife, nobody was harder on her than she was on herself…

Thank you to the many people who reached out to support her, both publicly and privately. We all wish Liv Morgan a speedy recovery. #EndCyberbullying