Edge and Christian open today’s show by discussing this past weekend’s ALL IN event.

They both note that they haven’t had the opportunity to watch the show in its entirety yet, but as soon as they get the chance they will do so. The bits and pieces that they saw were great and they loved the variety of matches throughout the show. There was a dream match featuring Kenny Omega and Pentagon Jr., lots of high flying stuff, and a traditional NWA Title match between Cody Rhodes and Nick Aldis. 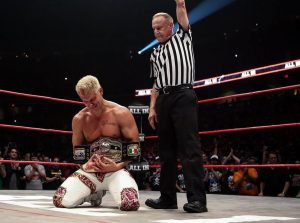 Moving onto the first episode of the Mae Young Classic 2, Edge says he’s a big fan of the tournament presentation. He really enjoyed the first episode of this season, even though you could tell some of the women were green in the ring. He points out that nowadays it’s impossible to gain experience without putting yourself in those situations with a room full of people, cameras rolling and loads of pressure.

They both thought M.J. Jenkins stood out during this episode, and they think she’s only going to get better with more experience. Christian thinks she has “star” written all over her. Edge notes that Rhea Ripley changed her look completely compared to last year, and he’s a fan of her new presentation. Commentators compared her to Charlotte this year, and Christian points out that you need to be your own person so this change was great for her.