It looks like we never know what will happen in pro wrestling. This could be some strategic backpedaling on Pentagon Jr’s part, but he recently told a crowd of people at a PCW show that he’s not going anywhere.

Both Penta and his brother Rey Fenix were telling indie promoters that they aren’t taking any dates in 2019 which usually means WWE is on the way. To make things even more obvious, MLW put out an incredibly apparent sign that the two are headed to NXT.

Barnburner Radio also reported that the two are on their way to NXT. But Reddit user Cullen396 said they were just at a PCW show and wrote this about their experience:

“I just saw Pentagon Jr retain the PCW belt, get on the mic and say he’s not going anywhere, Worked into a shoot?”

The general consensus in the comments is that it’s not a secret that Pentagon Jr is going to WWE, but they’re not allowed to talk about receiving an offer. So this was a move on Penta’s part to squelch the rumors the best he could. After all, there might have been a couple obvious slip-ups regarding his future. 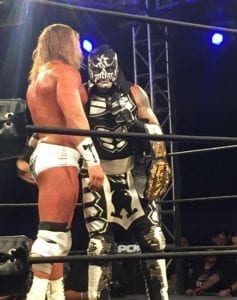