Jericho notes that his original contract in WCW was for three years, and after that contract expired he was eager to test the market in WWE. He notes that he grew up with WWE, and his dream was always to wrestle for WWE.  He calls his time in WCW a “means to an end” in order to get to WWE, where he really wanted to be.

Before his WCW contract expired he attended a WWE show in Calgary, Canada. Eric Bischoff wasn’t happy about that when he found out, but Jericho wanted to attend the show in order to mingle with WWE officials and Superstars. He notes that he met McMahon and his initial conversation didn’t go so well. He walked up to McMahon and said, “How do you like my town”, and McMahon said, “I like it fine”, then he turned back around. 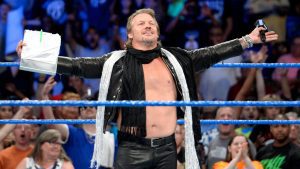 Jericho adds that some of the members of the WWE locker room didn’t greet him so kindly either. Guys like Triple H and X-Pac were hostile towards him, as they still looked at him as the enemy at that time.

Jericho resumed his career in WCW, but as his contract was set to expire he had a meeting at Vince McMahon’s house with McMahon, Jim Ross, and other WWE officials. It was unbelievable to be in that position, and he notes that there was a huge difference between Eric Bischoff and Vince McMahon. While Bischoff walked around in jeans and a leather jacket with his hat on backwards, McMahon was tall, thick and intimidating. He was a different person altogether.