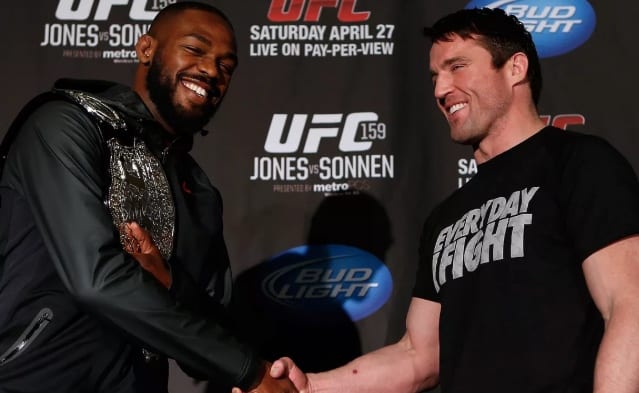 In the wake of supposed criticism from Jon Jones, Chael Sonnen has hit back in a big way on social media.

The Bad Guy has thrown several shots at Jones, who is currently out of action with a suspension stemming from his UFC 214 fight against Daniel Cormier. These two have actually squared off in the octagon, back at UFC 159 when Jones defeated Sonnen in a fight that was for the Light Heavyweight Championship.

While there are more tweets that you can see by visiting Sonnen’s page, the following are the main highlights from his tirade.

Turn your cel-phone off; USADA has GPS TRACKING

Chael has never been one to hold his tongue about anything, and when it comes to Jones, there’s always been something of a rivalry there. While the build-up to their fight wasn’t particularly mean spirited, courtesy of their respectful season opposite one another on The Ultimate Fighter, Sonnen has certainly voiced his concerns over Jones’ behaviour in the past.

Given how Jones has acted on Twitter in recent times, it wouldn’t be entirely surprising to see him respond to this. Either way, it clearly seems like Jon’s name is being mentioned more and more in the world of mixed martial arts as speculation grows over his future in the sport.

Some have suggested that he’ll be returning sooner rather than later, with there being no word from USADA regarding just how long he’s going to be out of action for. A lot of fans are eager to see him return, whereas others have labelled him a cheat who doesn’t deserve to come back.