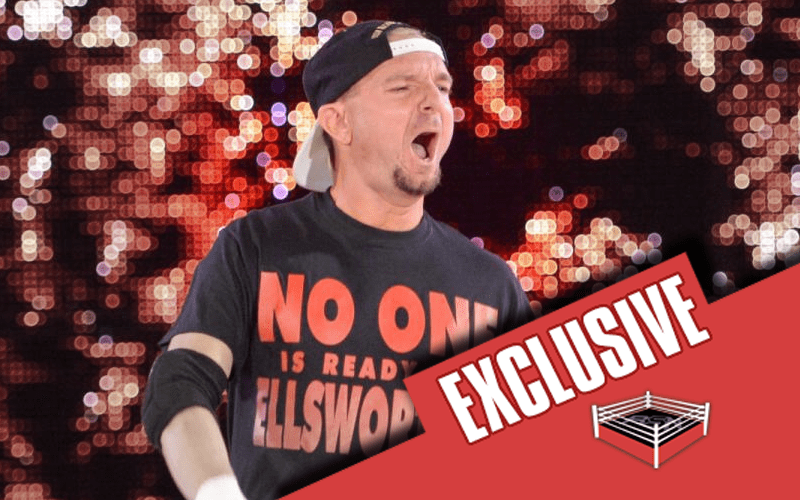 I recently had an exclusive interview with WWE Superstar James Ellsworth over the weekend. What’s interesting about the interview is as it was getting underway, Ellsworth was surprised about my employment with Ringside News and informed me that he’s been a reader of the site. “Are you from Ringside News? I read that site, that’s pretty cool man.”

Anyways, below are some highlights from the interview.

Ellsworth on getting into WWE:

Getting signed and having the hottest shirt in WWE:

“Obviously it’s surreal, you have to pinch yourself sometimes It’s like wow, I’m in WWE. Not only am I in WWE but I am working with the top guys, AJ Styles, John Cena, and my shirts number one on wweshop.com.It all happened so fast. I went from wrestling in a barn in West Virginia and two days later I’m wrestling Bruan Strowman on Monday Night Raw. IT all just escalated from there, and I’m still enjoying it two years later.”

Seeing the crowd on the entrance ramp at WrestleMania:

“WrestleMania 33 in Orlando. It was really hot all day, it was an outdoor show. I wasn’t thinking about it with the heat it didn’t feel like WrestleMania until I went through the curtain. I saw the 80,000 people, again, it was one of those pinch yourself moments where you’re like wow, I did it, I’m at WrestleMania. I made it to WrestleMania.”

“I had two matches for the heavyweight title with AJ Styles. The first match was a 10-12 minute match, which is average for a match on SmackDown and Raw. IT was another one of those, wow, I’m’ wrestling for the WWE title. That’s how I felt at first, like how anybody else would feel.”

Fans pushing to have him signed:

“Holy crap, I’m in this situation, I’m very lucky, I’m very blessed. I’ve got the fans to thank for it. There the ones who pushed for WWE to sign me and I’ll never forget that.”

“Oh man, that’s my buddy! We live in the same town in the Baltimore area. I’ve known him my whole life. He’s a friend of mine. We had a lot of fun for a couple of months teaming at Adrenaline Championship Wrestling.”

Ellsworth on his Intergender Title:

“Once I grabbed the women’s Money In The Bank briefcase for the first ever Women’s Money In The Bank ladder match, I became instantly hated by women all across the world. So why not take the opportunity and create an Intergender World Championship made first by Andy Kauffman back in the day. I’m a big Andy Kauffman fan so why not have some fun with it. It turned out to be this big thing and its just really really taken off.”

Ellsworth on WWE bringing him back:

“It was one of those things where WWE and I parted ways the first time I knew I’d be back. I didn’t think it’d be that quick. After hearing the crowd, I was like wow, I guess they missed me. Trust me, it’s a big blessing when people miss you and miss you entertaining them. I’ll never forget that moment in Chicago. I gotta thank the Chicago fans for that. I mean, they could have booed me out of the building, they could not have cared, but they cared. That meant a lot to me.”

On how hard Asuka kicks:

“She kicks very very hard man. I’m still sore with four days after wrestling her. She’s a tough, tough chick. She lives up to the hype.”

If Ellsworth is scared of heights:

“Thankfully I’m not. Well, it depends on how high they’re going to hang me in the cage above the ring.”

You can listen to the entire interview embedded in the audio below.