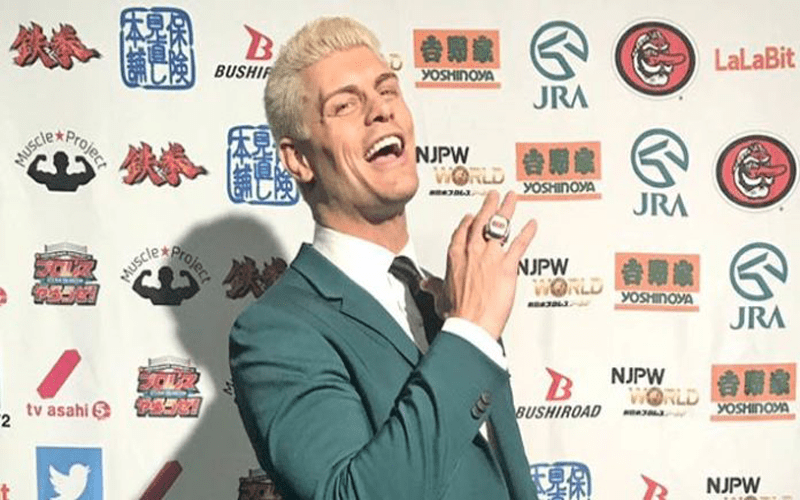 Cody has impressed many since leaving WWE back in 2016. Coming from being a lower to mid-card wrestler WWE, he sought to prove himself elsewhere. At this time, many feel Cody to be one of the better wrestlers not signed to Vince McMahon’s company. If this summer is any indication of things to come, Cody has a bright future ahead of him.

Cody has three huge matches booked and scheduled for this summer, and fans of The Bullet Club’s “American Nightmare” won’t be disappointed. Through three different opponents at three different events, Cody is sure to have some show-stealing matches throughout the coming months.

The first match will take place at ROH’s Best in the World pay-per-view on June 29. In Baltimore, Maryland at the UMBC Event Center, Cody will take on Dalton Castle and Marty Scurll for the ROH World Championship. This is the very title Cody had lost back in December 2017 to Castle, at Final Battle.

In an interview with Sports Illustrated, Cody commented on this match, which features a fellow Bullet Club member.

“I overtrained for Final Battle and Dalton Castle. Not unlike George Foreman [against Muhammed Ali] in Zaire. I’ve learned to balance more. There’s something to learn from Kenny’s one match a month schedule. Like him or not, he’s able to properly prepare mentally and physically. And to maintain his body.”

“I could lie to you about Dalton Castle or I could play coy. Dalton is competing with a very serious injury. Critics writing off his title run as a flop don’t understand the grit he’s displayed in that role. But, compliments aside, that’s the difference between me and everybody else: I can’t be hurt. I can’t be injured. I’m bulletproof. I’m championship material.”

“I think Marty being included in this match is wonderful. He supersedes the ‘junior’ qualification. He has a great fan base. But Marty is Prince Lotor. He sits at my table but doesn’t eat first. I do. Daddy eats first.”

The second match takes place in San Francisco, airing live on AXS TV on July 7. In what many are calling a rematch from their bout at ROH’s Supercard of Honor earlier this year, Cody is set to face the new IWGP Heavyweight Champion, Kenny Omega.

The final match will take place at All In on September 1 in Chicago. This highly anticipated event, funded by The Young Bucks and Cody himself was sold out within half an hour of the initial ticket release. As confirmed during the recent press conference for All In by Cody himself, he will be facing NWA Worlds Heavyweight Champion Nick Aldis, with blessings from Billy Corgan of the Smashing Pumpkins, who happens to be the current NWA owner.

During the interview, Cody also mentioned who he feels the top five wrestlers in the world are. Surprisingly, two of the wrestlers named are current WWE Superstars and former peers of his.

“In the modern era of reality is reality versus perception is reality, it’s simple. I am the best in the world. It’s 1: Cody; 2: Kenny; 3: Okada; 4: Charlotte; 5: Cena, with Ospreay creeping up on the list. It’s my responsibility with the event to live up to that ranking. I am unbelievably good at this, because of hard work and dedication.”

In the final words of his Sports Illustrated interview, Cody commented on being the self-proclaimed leader of The Bullet Club, and why he feels an extra sense of responsibility heading into the summer.

“As the leader of the Bullet Club, I can’t slow down now. I am an example for everybody who thought just slapping the Bullet Club logo on you would define your career. The Bullet Club keeps New Japan Pro Wrestling in the black. Far in the black. Because of me. I’m a part-timer in that company and I hold the Tokyo Dome merchandising record and Osaka’s. Funkos. Bucks on a career run. This Bullet Club may never be topped.”

“I live for this. I continue to study. To bump and learn. In 10 years I think there’ll be no doubt who really was the best in the world. Maybe ever.”