Jerry Lawler is joined on today’s show by his co-host, Glenn Moore.

Lawler informs that he visited his doctor and had a cat scan done recently, to check the effect that his stroke had on his brain. There is a dark spot the size of a quarter on his brain where his brain cells were damaged, but he was just fortunate that the damaged cells weren’t in a different location on his brain because he could have lost the use of the entire left side of his body. Overall the doctor was pleased and Lawler doesn’t have to visit him anymore.

Lawler and Jim Ross traveled together to Saudi Arabia for WWE’s Greatest Royal Rumble event, and he says he’s glad he had Ross’ companionship on those flights because if he was traveling alone he would have been bored stiff. He says that the trip was challenging, and he doesn’t know how people make long trips like that in the cramped quarters of economy seating. 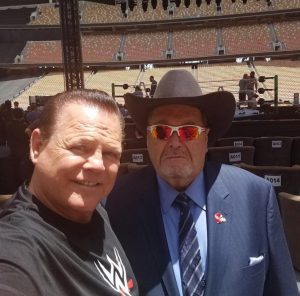 He informs that it was a breeze getting through security when they were travelling into Saudi Arabia, but they had a much tougher time when they traveled from Saudi Arabia back to Paris before boarding the plane back to Atlanta. He adds that they were triple checked before boarding that plane, and Ross was upset because the security guards took his hat to check it and crumpled it all up.

Lawler mentions that he was concerned about bringing his cell phone on the trip. Visitors can get the death penalty for bringing drugs or pornography into the country, and Lawler was concerned that they’d take his phone, scroll through social media and see a picture of a half naked women or something along those lines. Luckily, they treated the WWE talent like kings over there, and they never had any issues at all.