X-Pac opens today’s show by discussing Brock Lesnar’s new WWE contract. For the first time Lesnar signed a pay-per-appearance contract, which allows WWE to utilize him when they need him and just pay him for those appearances. The new contract also includes licensing, which allows WWE to license Lesnar’s look and they pay him a flat fee of over $600,000/year for that. Lesnar also gets over 6% of his merchandise sales.

X-Pac points out that while some of the numbers in this contract are astronomical, WWE would have never signed it if it wasn’t mutually beneficial. He thinks this is a great deal for Lesnar, WWE, and for all wrestling fans because Lesnar is a great entertainer. 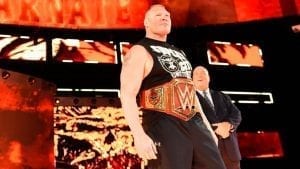 Speaking about the controversy surrounding the Greatest Royal Rumble event, X-Pac says he can certainly understand the points being made by both parties in this case. While it’s unfortunate that women can’t compete or work on this show, this is a big business opportunity for WWE and maybe the company’s influence in Saudi Arabia can go a long way in progressing women’s rights there.

X-Pac says he was sad to hear that there was an issue at Wrestlecon between Jake Roberts and Harry Smith. Apparently there were some words spoken and Harry’s father, Davey Boy, might have been the topic of discussion. X-Pac points out that we should take it easy on Harry here because there was pride involved in this case and he’s actually surprised that Roberts is pursuing this legally.