Lillian Garcia welcomes The IIconics to the show.

Garcia informs that she’s been very impressed by Billie Kay & Peyton Royce in NXT. She recalls having a conversation with Carmella when she was frustrated in NXT as she waited for a call to the main roster. Garcia told her at that time that eventually the call will come and then she’s going to soar, and she thinks the same thing applies now to Kay and Royce.

Kay informs that her and Royce both grew up in Australia and actually went to high school together. She was very close with her mom growing up but had some issues with her father. She was a big sports fan and played basketball all throughout high school, but she was also bullied quite a bit. She admits that after being bullied for a while she became a bully herself, because she was sick and tired of being the one that was picked on. It took her a while to grow up but once she did she matured quickly and got out of that rut, and she’s thankful for that. 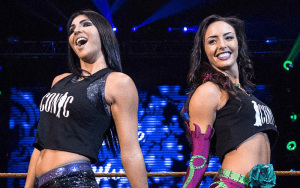 Kay recalls becoming a fan of wrestling at the age of 10. Her brother would watch RAW and all the PPVs, and one night he set up and chair and invited her to watch with him and his friends. She immediately fell in love with it and recalls being completely mesmerized by The Rock. From that night on she didn’t miss a show, and her mother would even allow her to stay home from school one day a month when the PPVs were on so she could watch the shows.

She began training to become a professional wrestler and wrestled her first match the day she turned 18. She actually began training with Royce at the same school and initially they didn’t like each other, but after spending more time together they got to know each other and they became great friends. They made it their goal to make it to WWE together.