Lane opens today’s show by speaking about Ronda Rousey’s performance in her debut match at WrestleMania. He thought Rousey looked great in the match, but he thought Stephanie McMahon was booked too strong. Stephanie fought out of multiple arm bars from Rousey and he thought that was ridiculous. 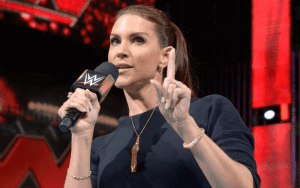 Gilbertti says there’s a clear suspension of disbelief whenever a McMahon enters the ring. Vince has done it before and so has Shane. Stephanie has done it in the past as well and continues to do it now, and as a fan we’re conditioned to believe that she can compete with all the other female wrestlers. He adds that the training montages of Stephanie made her look strong and this assisted the audience’s suspension of disbelief, allowing fans to believe that Stephanie could legitimately defeat Rousey.

Gilbertti also points out that Stephanie has been booked incredibly strong for the past 15 years. She constantly goes over talents on the mic and is rarely placed in vulnerable positions on television. He does admit that WWE should have had Rousey break Stephanie’s arm because he thinks that would have been a much better angle coming out of WrestleMania.