Lane opens today’s show by playing a clip of Wrestling Observer’s Dave Meltzer & Bryan Alvarez, who were trying to defend the A.J. Styles/Nakamura WrestleMania match. Alvarez pointed out that a few people were chanting “boring” during this match, and Meltzer was astonished by this information. Meltzer said he wouldn’t want to threaten violence, but that was his first instinct when he heard this information. 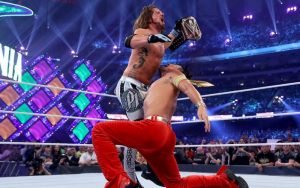 Russo thinks it’s hilarious that Meltzer is threatening violence over trying to defend a wrestling match. Russo jokes that the fans who were chanting “boring” during that match were definitely Brand members, so Meltzer is basically threatening Brand members with violence. He jokes that he might have to take the Ryan Satin approach and go after Meltzer’s sponsors.

Lane informs that a professional journalist sent him and Russo an email this past week. In the email, the journalist said that wrestling’s dirt sheet writers can’t consider themselves journalists because they don’t follow several professional guidelines. A couple of these guidelines include providing relevant sources and minimizing harm with your work.