The WWE Superstar Shake-Up can do a lot of things including break up a tag team. But The Bar isn’t thinking about splitting up right now. They are however considering the possibility of a move to SmackDown Live.

Sheamus and Cesaro just lost the Raw Tag Team Titles at WrestleMania and they could get them back at the Greatest Royal Rumble. But if they experience a trade to SmackDown Live that won’t change their goal to become the top team no matter where they end up.

Of course, Sheamus and Cesaro might have to deal with the Bludgeon Brothers if they make the move to the Blue Team so they might be better off where they are for the time being.

Cesaro uploaded a picture on his Instagram story of himself with Sheamus to illustrate that no matter which brand they are a part of they won’t just set the bar because they are The Bar. 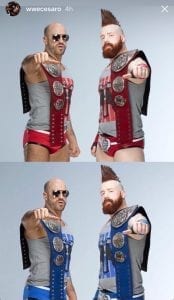