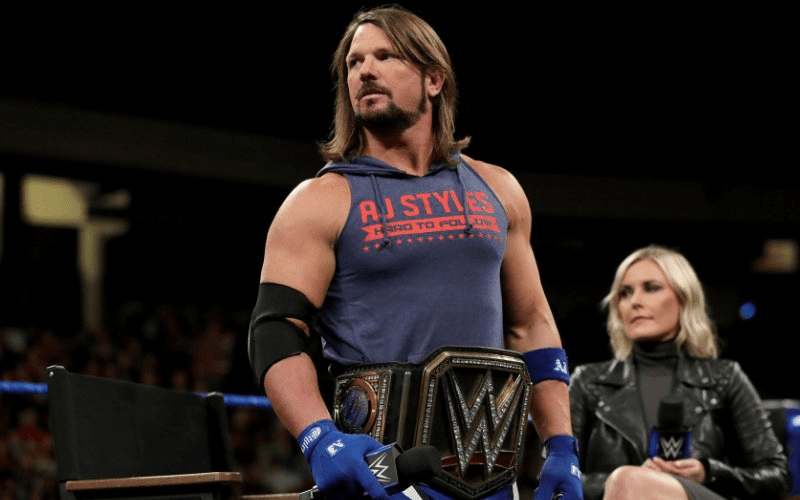 It was reported over the weekend that AJ Styles had suffered an injury of sorts and he missed this weekend WWE Live Events after they did an injury angle at Friday’s Madison Square Garden WWE Live Event.

Dave Meltzer discussed the injury on today’s installment of Wrestling Observer Radio and indicated Styles’ injury could be a knee-related. At the time of press when the story was first reported, it was unknown what exactly the injury was.

“The only update is that he was getting evaluated this afternoon [Monday]. He was in Dallas and I don’t know what happened from there. I heard nothing other than it was happening. I don’t even know the injury. I know that the injury in The Garden — They did a knee injury angle, so that may mean it could be a knee injury.”

Meltzer mentioned that because he hasn’t heard anything from WWE saying that the injury is just a “minor” injury that it very well could be a serious injury.

“The severity of it — I just think it’s interesting how the length they have gone to keep it quiet. It’s more that nobody knew. We may hear something tomorrow but whatever it is I don’t think they want it out. I can’t believe that it’s that minor because I believe if it was minor we would be told, “it’s minor, it’s nothing to worry about” and we certainly have not been told that.”

Meltzer pointed out that WrestleMania is just three weeks away and there is the possibility that his match against Nakamura for the WWE Championship could be in jeopardy because it doesn’t leave much room for recovery time even if it is minor.

“Is it Mania’ threatening? Look, we are only three weeks away from Mania’ so obviously if there is any chance — it could be a lot of different things. I think if there is any chance that he can do Mania’ and postpone if he’s going to need something done, I think that he will do that. I think that he wants that match but that may not be a possibility, or maybe it’s that serious. Mania’ is a big payday. Essentially I like to think we will know more tomorrow.”

What do you think WWE should do as a backup plan if AJ Styles is unable to compete at WrestleMania this year? Sound off in the comment section below…