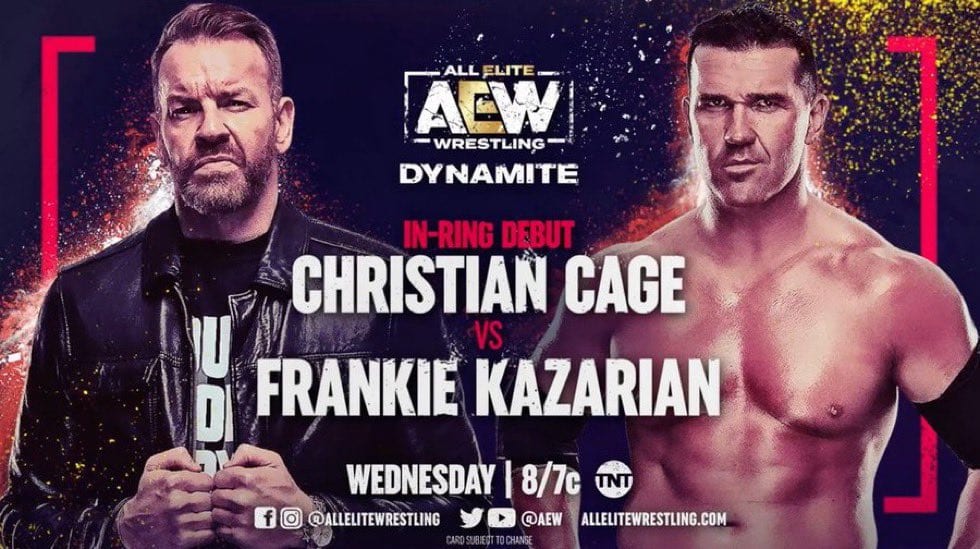 It’s Wednesday and you know what that means. AEW Dynamite will go down tonight and Ringside News has got you covered with live play-by-play results coverage.

Start time for AEW Dynamite is at 8:00 PM EST. Match-by-match highlights and results from the show will take place on this very page. Feel free to leave any
reactions in the comment section below. The card for tonight is as follows:

Christian Cage is kicking off Dynamite! SCU’s music plays to bring out Kazarian.

Kaz with a chop, and another. Cage whipped hard into the corner. Big right hand from Kaz, Cage tries to block. Back elbow from Cage, Cage with a dragon sleeper but gets pushed out of the ring down to the floor by Kaz. Kaz taunts Cage to get back in the ring. Kaz with a leg drop through the ropes. Kaz with a headlock. Cage is fading. Cage fights out momentary but Kaz drops him, 2 count. Kaz with a back drop, 2 count. Strikes back and forth, Kaz gets the upper hand. Cage whipped hard into the corner, Cage gets the legs up, right hand, tornado DDT from Cage, 2 count.

Cage shows respect to Kaz after the match.

Darby Allin video package on Matt Hardy. Hardy will have to earn Darby’s respect, because money doesn’t mean s*** to him.

The Nightmare Factory students are a ringside. Cody Rhodes makes his entrance. QT Marshall is already in the ring. Dustin Rhodes and Billy Gunn come down to greet Cody. Arn Anderson is the special referee.

Cody and QT shake hands. Lock up, Cody driven to the corner, they break in the middle. Cody hooks the leg. Another lock up, Cody with a shoulder block, crisscross, Cody with an armdrag into and armbar. Cody feigns stomping on the face. Cody with a right hand, QT with a dropkick. QT concentrates on the taped shoulder.

Picture in picture. QT continues to work the arm, Cody bridges out of a pin fall. Cody sent into the corner, powers out with a elbow strike. QT with a hammerlock, leg drop on the shoulder. Cody with forearm strikes, QT continues to hold the arm. Cody turns the tables with a big bodyslam. Cody goes for a figure 4 but changes his mind, goes for a crossrhodes but stops himself. QT with a right hand, QT misses a crossbody.

Aaron Solow, Nick Commerato, Anthony Agogo attack the Nightmare Factory students. QT Marshal is directing traffic. QT contiunues to attack Arn Anderson on the outside. Commerato lifts the steps onto the stage, Dustin is bleeding, QT with a piledriver to Dustin Rhodes onto the steel steps. Anthony Agogo with boxing strikes to Cody. QT Marshall has a chair. Red Velvet stops QT from hitting a con-chair-to on the steps. QT Marshall and his group back away.

Ethen Page and Scorpio Sky say they are not waiting anymore. They will take anything and everything they want and it starts on Monday.

Dasha is with Red Velvet backstage, she says she has Cody’s back, Jade Carghill attacks her.

Jon Moxley is backstage, says he cant get the sound of the Good Brothers attacking Kingston out of his head. He still owes them one. Says he might kill Cezar Bononi tonight. Moxley makes his entrance.

Moxleys tees of on Bononi, tries to run Bononi over but fails. Bononi with strikes in the corner. Moxley attacks the leg, dragon screw. Moxley with a half crab. Kick to the chest. Bononi with a big suplex, 2 count.

Nemeth and Drake distract the ref, Moxley hits a Paradigm Shift of Nemeth. Bononi goes for a pumphandle slam, Moxley locks in a sleeper for the victory.

MJF is backstage with a gift to the Pinnacle. He introduces a personal stylist. Says the room is a dump, but he got them an interior decorator. Inner Circle is in the bathroom. MJF tries to run, Inner Circle attack the Pinnacle. They brawl through backstage, Sammy attacks Spears with the door, Wardlow slammed through a massage table. Cash Wheeler thrown into an ice bath. Santana attacks Dax with a broken chair leg. Jericho and MJF fight in the bathroom.. Jericho puts MJF head in the toilet. MJF sent through a vending machine. Jericho pours a little bit of the bubbly on MJF and they throw MJF out of their locker room.

Marvez is with the Young Bucks backstage, Callis interrupts, Callis says he need to talk to Matt. Says he loves Kenny, says Matt broke Kenny’s heart last week. Callis says they chose not to help Kenny, and they broke Kenny’s heart, what has happened to them? Callis slaps Matt. Matt grabs him but lets go. Callis asks if there is anyuthing inside them? They make him sick.

Lucha Brothers and Laredo Kid make their entrance. They want Kenny’s title. Kenny had to cheat to win his title, they want all the titles. Omega and the Good Brothers are out next. Callis is holding Kenny’s AEW World Title and the Triple A Mega Championship.

Lucha Bros attack them on the stage.

Kenny gets attacked by all three in the ring, Good Brothers try to makes the save to no avail. Suicide dives from the Lucha Bros to the outside. Laredo Kid and Omega fight in the ring, Kid with a moonsault for the 2 count. Omega with a back elbow and explodes out of the corner sending Kid down. Gallows tags in, Anderson distracts Kid, Gallows with a roundhouse kick. Kid sent hard into the corner. Anderson tags in, backbreaker to Kid, 2 count.

Omega tags in, works the shoulder. Elbow to the chest, 2 count. Gallows tags in, big boot. repeated elbow drops, 2 count. Picture in picture. Hammering elbow strikes. Anderson tags in, kick to the midsection, Omega tags in, double axe handle, stomps to the back. Gallows tags in, kick to the ribs. Big right hand and a huge suplex. Leg drop for the 2 count. Body slam and tag to Omega, Omega and Good Brothers with a triple splash for the 2 count. Gallows with a headlock. Kid hits a tornado DDT. Penta tags in, slingblade to the Good Brothers. Fenix with a double bulldog, double splash from the Lucha Bros, Moonsault press and diving stomp and senton atomico, 2 count.

Penta, Fenix and Kid with kicks in the corner, Omega and Good Brothers with a triple neckbreaker for the 2 count, Penta saves Fenix. Anderson with a high boot for a 2 count. Good Brothers attempt a Magic Killer, Penta stops them, Fenix with a hook kick, Penta with a Canadian destroyer. Anderson with a spinebuster, 2 count as Kid stops the count. Omega tags in with Kid, Kid hits some kicks to the midsection, Omega with a powerbomb and a V Trigger, 2 count. Kid counters One Winged Angel into a hurricanrana, dives to the outside, Good Brothers and Lucha Brothers square off, Penta with a dive to the outside, Omega misses a V Trigger, Fenix with a ropewalk kick, Kid with a 2 count.

Kid misses a pheonix splash, Omega hits the V Trigger and a One Winged Angel for the victory.

Moxley appears at the top of the stage with Kenny celebrates. Young Bucks come out. Omega and the Good Brother clear out of the ring as Moxley and the Buck charge the ring.

Britt Baker and Rebel are backstage. Baker plugs Elevation on Monday. Says Thunder Rosa’s victory in the lights out match didnt count becasue it was unsanctioned.

Nyla Rose makes her way to the ring with the Bunny. Butcher, Blade Matt Hardy and Private Party also come out. Hikaru Shida and Tay Conti enter next with the Dark Order.

Hikaru Shida and Tay Conti vs. The Bunny and Nyla Rose

A brawl starts the match, Rose shoves the Bunny away. Rose with a body slam and big legdrop for a 1 count. Bunny tags in, strikes with Shida, Shida grabs the hair and judo throw into an armbar. Bunny gets to the ropes. Shida with a driving knee lift. Faces down Matt Hardy and Rose attacks her from behind. Bunny with a 2 count.

Conti with a punt to Bunny on the outside. Spinning backbreaking right in front of Hardy. Dark Order attack Hardy Office. Conti with a TayKO, 2 count. Shida with a strike off Conti on Rose, Shida dives onto the Dark Order, Conti dives onto everybody sending them down. Bunny has a kendo stick, hits Conti, Down the Rabbit Hole for the victory.

The Bunny and Nyla Rose win.

Commentary runs down next weeks card. Jurassic Express are backstage, Calles Bear Country mammals. In honour of Godzilla vs King, they will show them who is top of the food chain. Stunt shows a Kong tattoo.

Miro and Kip Sabian make their way to the ring. Arcade Machines fill the ringside area.

Orange Cassidy and Chuck Taylor are out next. They run to the ring and attack Miro and Kip.

A bralw starts the action, Miro with a fallaway slam, Kip throws Orange into a whackamole machine, Orange hits Kip with the mallet, Miro throws Orange into the ring post, and a slam onto the floor. Miro hits Orange with the mallet. Miro sets up the barricade, Chuck and Orange go for a double suplex, Miro reverses, and suplexs Chuck into the barricade.

Miro grabs a chair from the prize rack, Miro with forearm strikes to Orange, Orange with shots to the gut to little effect, Orange stops Miro slamming him into the chair momentarily, but Miro powers through and slams him into the chair. Chuck dives off a Mortal Kombat machine onto Miro. Orange with a running kick to Kip, Chuck and Orange hits Miro with a trashcan lid and an Kendo stick.

Orange and Chuck get the barricade and run it through Miro, the dump all the weapons and the machines onto Miro, Kip dives into save a pinfall attempt. Kip with dropkick and a belly to back suplex and a shotgun dropkick. Chuck with a teddy bear filled with legos, Kip hits Chuck with a powerbomb on the legos. Orange saves the pin. Orange with a DDt on the legos, beach break for the 2 count. Orange punch, Ford pulls the ref out of the ring. Ford with a low blow on Orange.

Kris Statlander appears from an arcade machine attacking Ford. Big slam through an air hockey table. Miro with a throw to Orange. Miro hits Orange with a chair, then hits Chuck with the chair. Miro attacks both men. Orange and Chuck try to escape. A car appears, Trent appears from car driven by Sue. Trent, Chuck and Orange all attack Miro, Miro fights off all 3. Miro waves to Sue. He climbs on her car, Trent comes to the rescue, slamming Miro onto the hood. Trent sent into the barricade.

Miro picks up Mortal Kombat machine, throws it at Trent but misses, Trent throws a chair at Miro, Trent with a spear through the table. Chuck with a running powerslam through the stage for the victory.

Dynamite ends with Trent, Orange and Chuck celebrating in the ring with a big hug with Kris Statlander.