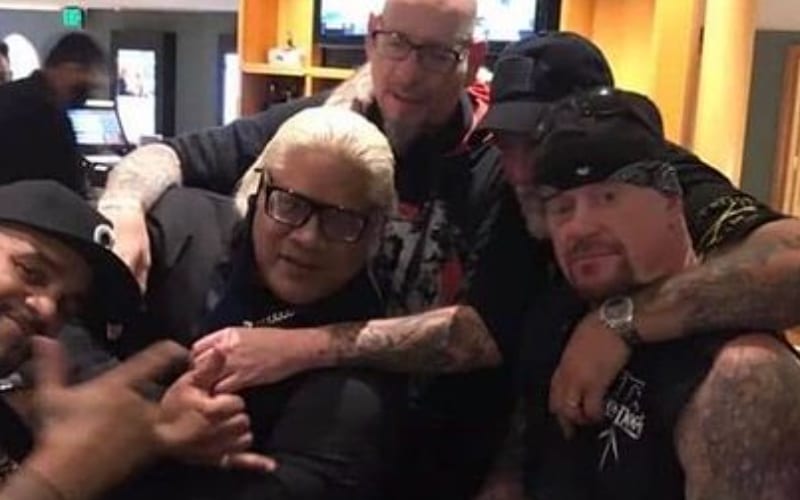 The Undertaker gave his Final Farewell at Survivor Series last year and WWE made it the biggest event they could without any fans present. The company invited Undertaker’s backstage group of friends to the event and they had a wild time before the show.

The Shining Wizards podcast recently had Henry Godwin on the show where he discussed that awesome party in November. It didn’t take any coaxing for him to make the trip for The Undertaker’s big moment. Once the Dead Man arrived at the hotel bar they consumed plenty of adult beverages.

“Bruce Prichard had called me and said ‘Undertaker’s retiring. We’d like to get you guys down here. I said you don’t have to ask me twice. I’ll be there.”

“It’s been 20 years since the whole BSK group had been in the same room together.  I’d been with Papa (Shango), Rikishi, Savio and Phineas but as a group we hadn’t been together.  So we flew down there and everyone was meeting that night. We had our COVID tests and everybody passed. So we went to the bar and Taker was gonna be there about 10:30, so we hung out.  And then here comes Taker and that’s when all the sh*t began.“

“Four bottles of Jack and about 100 beers later Godfather and Taker were putting me to bed at 3:30. We put in twenty years in one night, so I’m good for another twenty.”

Four bottles of Jack Daniels and 100 beers might be a light load for the BSK, but they also hadn’t partied like that in twenty years. It just makes you have to wonder what kind of consumption they could pull off during their prime.