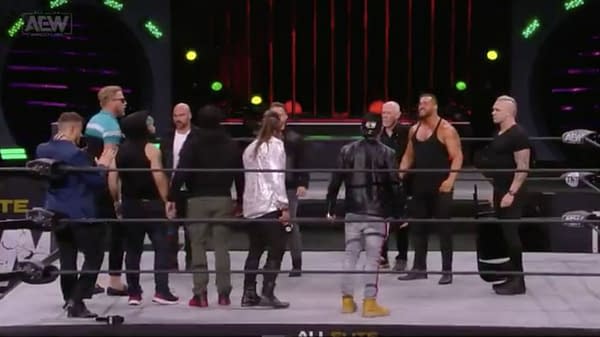 MJF bid his time and waited many months to lull Chris Jericho into a false sense of security before he finally debuted his own faction called Pinnacle a couple of weeks ago on AEW Dynamite. Pinnacle decimated The Inner Circle and they haven’t been seen since then.

There is no doubt a lot of bad blood between the two factions and since their debut, fans have been wondering whether the factions might duke it out in a Blood and Guts match.

While speaking to Will Gavin and Alex McCarthy of talkSPORT, Pinnacle leader MJF talked about the likelihood of the match taking place.

MJF noted that while he isn’t keen on competing in that sort of match, if it ever happens, then the match will be the most barbaric match in the history of professional wrestling.

“After watching all of these Lights Out matches and Deathmatches and Hardcore matches- after being in the ring with Jon Moxley and unfortunately, at points, being outside of the ring in his comfort zone, where he would be able to use the guard rails and the posts, I think a Blood & Guts match between The Pinnacle and The Inner Circle would go down as the most barbaric match in the history of professional wrestling. I think it would be gruelling, I think it would be terrifying”

“I don’t know if that’s something I want to put my body through nor do I know if that’s something I wanna put my boys in The Pinnacle through. However, if it did come down to that, we’ve seen it before, I can get just as sadistic as the rest of them if you cross me. I have proven that over and over again . . . However, like I said, if that match were to occur I do believe that it would go down as the most historic match in the history of my promotion, AEW”

A year ago, a Blood and Guts match between The Elite and The Inner Circle was announced but got cancelled due to the COVID-19 pandemic. We will have to see if the match happens this time around.