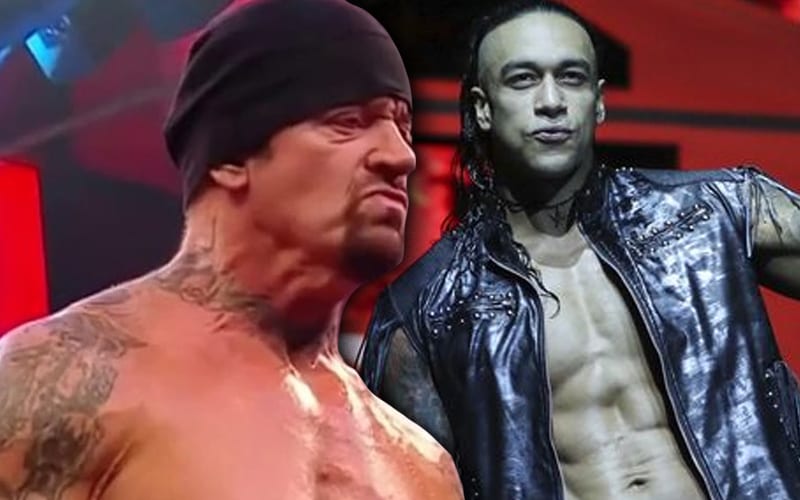 Damian Priest has been given plenty of great opportunities since joining WWE. He is destined to get many more, and The Undertaker was there to help him out a bit.

The Squared Circle Pit podcast recently had Damian Priest on the show and he talked about The Undertaker coming to the Performance Center to work with him. He praised The Undertaker for getting in the ring and putting on gloves to actually train with them.

Priest also revealed that The Undertaker’s worked punches are so good that he almost got his nose broken, but then begged for him to do it again.

“And then what wasn’t on it [the footage of Undertaker being at the Performance Center], we actually got to get in the ring a little bit with Undertaker, and man he put on the gloves and everything. I was like, ‘Oh no, he’s gonna beat us up,’ and then I actually got to lock [up], throw some blows with him and I remember he was showing somebody something and he threw a punch and he was just explaining something so he wasn’t actually trying to hit me, but he threw it full speed and it touched my face and he pulled back, I mean just before he broke my nose and I was like — and I looked around and I was like, ‘Man! That was awesome, do it again.’ So cool. Again, the fan in me couldn’t help it.”

The Undertaker’s Final Farewell took place during Survivor Series last year. That likely means fans won’t have another chance to see The Undertaker in action, if his retirement sticks. We’ll have to see if The Undertaker ever laces up his boots again, but Damien Priest will never forget the experience he had with the Dead Man.