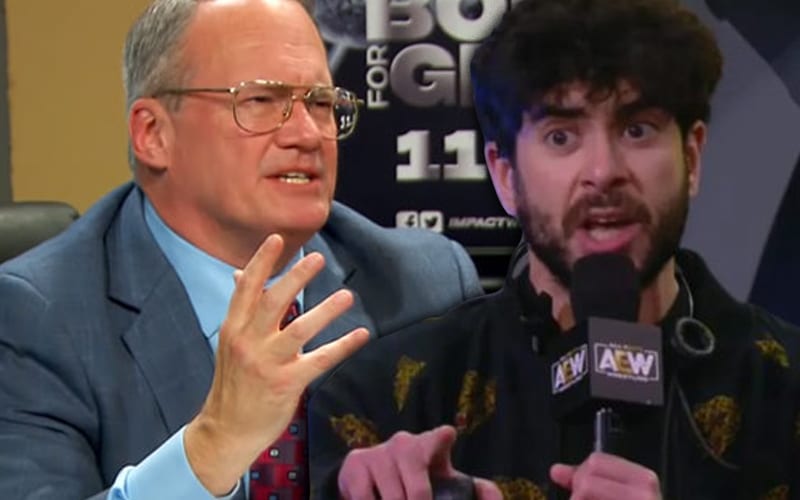 Kenny Omega tried to get one over on Tony Khan during the AEW Dark: Elevation debut. That caused Khan to come out and cut a frantic promo on The Cleaner. Jim Cornette was paying attention.

During The Jim Cornette Experience, he went into Tony Khan’s promo on Kenny Omega. Cornette didn’t know what to make of it at first.

“Oh Tony Khan’s done a promo! What in the wide world of sports was that? Is it on their YouTube show?”

Cohost Brian Last confirmed that the Tony Khan promo took place on AEW Dark: Elevation. Cornette then replied saying: “They must be high, ” before he continued to pick apart the President of AEW’s promo.

“It’s Twinkle Toes [Omega] and Matt Sydal have done something and here comes Tony Khan looking like a disheveled coked-up school teacher who’s at his wit’s end about his unruly class. He said a lot of words in a short period of time including the phrase ‘nine days from tonight’ about sixteen times and he made a match. So now he’s the on-camera commissioner. Is this I guess where it is going?”

Jim Cornette said that Khan’s promo was a one-time thing because “of how that one time turned out.”

Cornette then brought up how Tony Khan said he won’t be an on-air person, and then they mentioned how he is a character on Impact Wrestling in the AEW commercials. That promo on Elevation obviously wasn’t up to Cornette’s standards.

He then said that “Dixie Carter was a better TV character,” and “some people just don’t need to be on television.”

We’ll have to see if and when Tony Khan appears on AEW television next. Tony Schiavone made it clear that Khan doesn’t intend on making this a regular thing. Jim Cornette is probably happy about that.