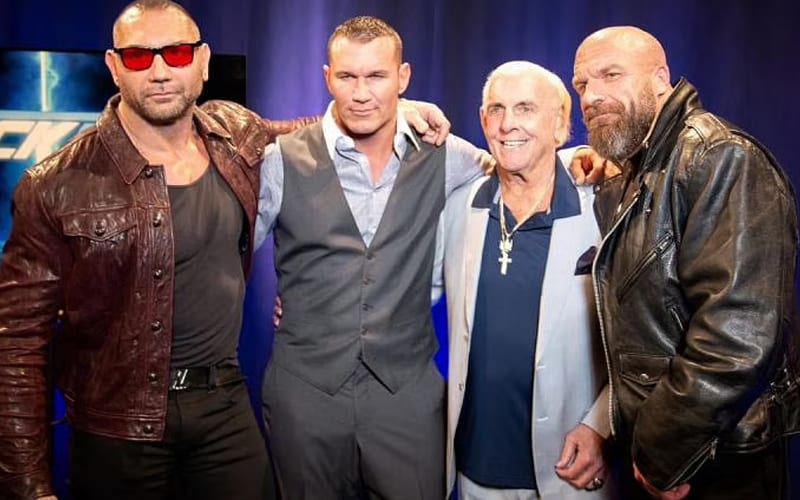 Ric Flair was part of the famous Evolution stable in WWE. Triple H, Randy Orton, Batista, and himself made plenty of towns, but they didn’t tear up the nightlife like the 4 Horsemen did at all.

While speaking to Wrestling Inc, Ric Flair revealed that he never saw Triple H have more than a glass of wine, but he would destroy about six steaks a day. Randy Orton didn’t really drink much and neither did Batista. They still found a way to have a good time.

“Hunter doesn’t drink at all, so I’d drink and Hunter would eat a steak. Randy doesn’t drink much at all, maybe a couple drinks. Dave, I would get to come out once in a while, but those guys were so attentive to their physiques. The drinking thing just was starting to wind down with the guys, and those guys put so much time in the gym. To look like that, you gotta work hard. The drinking wasn’t really a part of it. I got all of them to come out one night or another, but not Hunter. I’ve seen Hunter maybe have one glass of wine. Hunter would spend more money on food at the bar than I would spend on booze. The guy would eat six New York strip [steaks] a day, I’m telling ya!”

Evolution split up and everyone went their separate ways. They still created a ton of memories in the process. That stable is also a snapshot in time fans will never get back which is why it brings up so much nostalgia today. If you’re looking for a stable that really lived the gimmick then Flair’s previous adventures with the 4 Horsemen is probably more up your alley.