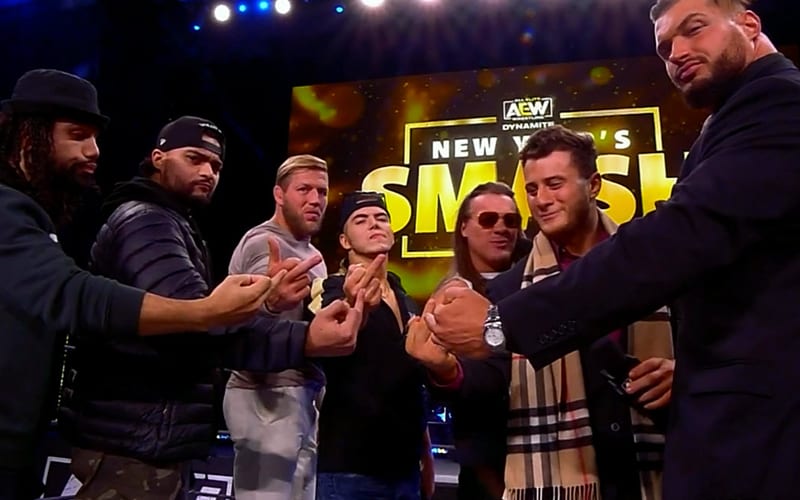 The Inner Circle debuted during the closing moments of the first-ever AEW Dynamite. That Washington, DC crowd had no idea that the stable would continue dominating AEW for over the next year.

Chris Jericho is very proud abut hos consistent The Inner Circle’s storylines have been. Even today, they are able to surprise fans. Last week saw Sammy Guevara’s exit from the stable, and there could be many more shocking moments to come.

While speaking to Wrestle Zone, Chris Jericho opened up about the Inner Circle’s storylines. He is proud that they are able to continue pumping out quality content that has become a focal point for AEW Dynamite every week.

“So, you take what you’re given and morph and work your way around it and continue to build. And that’s one thing I think AEW has done in spite of the pandemic. Thank goodness we’re in front of crowds now—even though they’re smaller ones—for six months, we had no crowd, but we still put on great programming. The stories we’ve told, from Jericho/Cody to Jericho/Moxley to Inner Circle vs. The Elite then going to Jericho vs. Orange Cassidy and now Jericho/MJF and the Inner Circle, it always makes sense and it always leads to the next thing and always intertwines and I take great pride in that.”

“It’s exciting to see every week how the story unfolds and I always say, like when I go to a movie, I don’t want to know what the beginning, middle and end is. I want you to surprise me and see it kind of unfold the way that the director and the storytellers want it to unfold. So, when people always try and guess what’s going on—and maybe one week they’ll bury something because they didn’t like what happened or whatever—it’s just one part of the story,” Jericho explained. “Here’s the story [and here’s how it breaks down] each week. One scene leads to the next, but I think our fan base knows that, and I think that’s why our numbers continue to grow. Demo God is no joke, our demos are through the roof. I know that our TV partner is very happy with it and we’re kind of looked upon as the cool wrestling company, the cutting edge wrestling company and that’s exactly what we are.”

We’ll have to see how the Inner Circle shocks fans next. Adding MJF to the situation was an element that could end up imploding for the stable. If anything, it will certainly continue creating compelling content for AEW along the way; because that Demo God moniker is no joke.