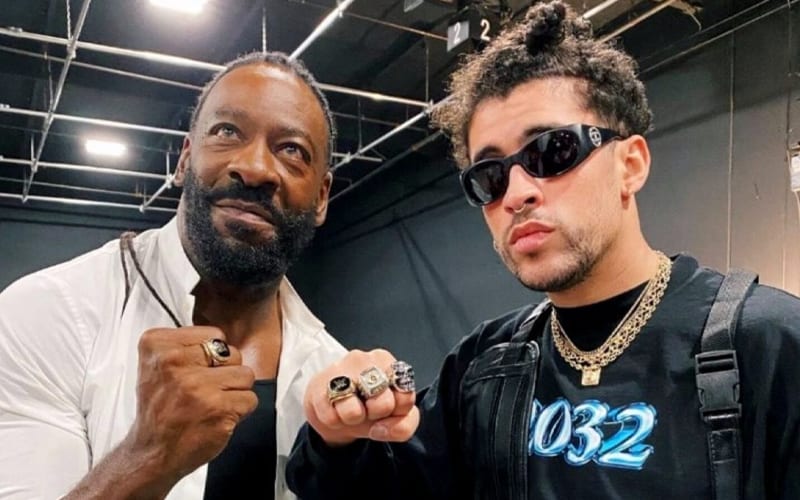 Bad Bunny arrived in WWE, and he is living out his dream. He always wanted to become a WWE Superstar and this experience is one he is taking full advantage of.

The famous rapper entered the WWE Universe through his association with Booker T. After Bad Bunny dropped the “Booker T” song it just made sense for him to perform that at the Royal Rumble.

While speaking on his Hall of Fame Radio show, Booker T said that he’s not the best of friends with Bad Bunny. It’s not his style to insert himself in someone’s life just because they admire him. He also explained that Bad Bunny’s WWE storyline is proceeding without the 6-time World Champion for a reason.

“I could definitely see his vibe and the way he felt,” Booker T said. “He was ready man, he was running around like crazy. I had so much fun doing the song and then doing the segment with him, but I did not want to take any shine away from him or anything like that.”

“To see how he went out there and held his own as far as The Miz and Morrison [interaction during the Rumble match] and then with Damian Priest [on Monday Night RAW], I thought it was great. I thought with me being anywhere near him would’ve taken something away from him, so I blessed him and said after we did the song and let him know it’s all on you as far as what happens here going forward. I think Bad Bunny did a good job.”

Booker T apparently blessed Bad Bunny’s future WWE involvement, and now he’s off to the races. Bad Bunny is having a great time in WWE so far and he’s just getting started on the road to WrestleMania.

In case you’ve heard any complaining about backstage heat on Bad Bunny, we have to squash that rumor right here.