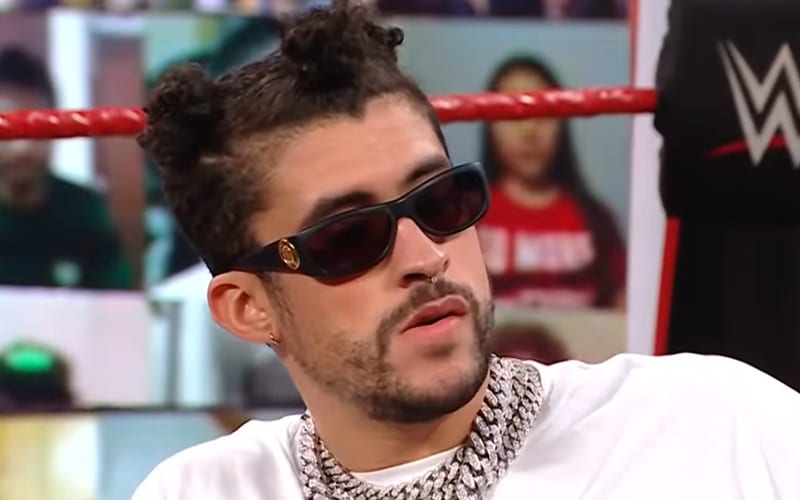 Bad Bunny showed interest in pro wrestling when he wrote a song for Booker T. It turns out that the famous rapper is also a big pro wrestling fan. Now he is living his dream in WWE.

WWE sold a ton of merchandise when Bad Bunny dropped apparel on their online store. Now there is even more merchandise, but Triple H said during a recent TakeOver conference call that Bad Bunny is “just one of the guys” when he’s training.

Triple H also praised Bad Bunny for the respect he has for the business. It seems that Bad Bunny is training for a WrestleMania match, and Triple H couldn’t say enough good things about their new guest.

“I can tell you I have not been more impressed with anyone sorta walking in the door like, ‘hey I’d like to do this thing with you and engage with you’ as Bad Bunny. I cannot… he is phenomenal; so respectful to what we do. He’s the biggest fan living a dream right now, but in every way that you could possibly imagine he is respectful and loving what we’re doing. He’s so into it.”

“I see him training all the time. I see him working out all the time. When he’s there, he’s just one of the guys and it’s just awesome to see. I just can’t say enough good stuff about him.”

Bad Bunny brought a lot of eyeballs to WWE. It might not have helped ratings much, but the crossover appeal that Bad Bunny brings to the table is showing in other ways. We’ll have to see what’s next for Bad Bunny in WWE, but the two sides apparently have a great thing going.