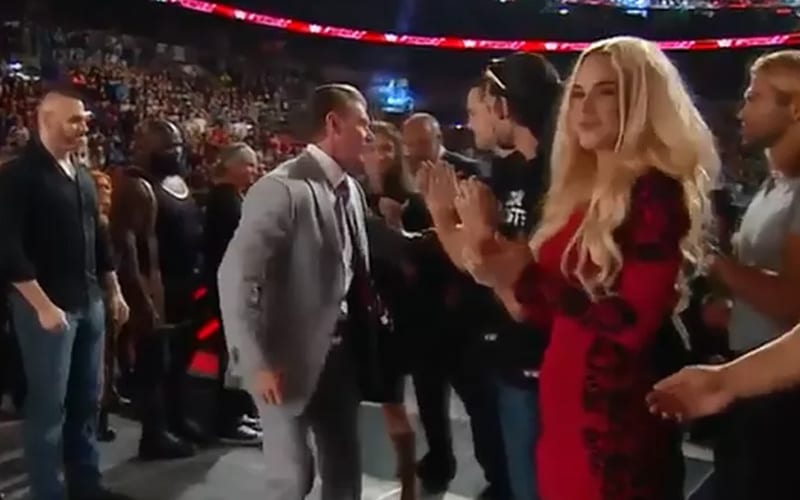 Daniel Bryan was forced to retire from the ring, but his time away didn’t last forever. It was a very emotional night when he had to give the sad news that his time in the ring was at an end. Titus O’Neil’s time in WWE almost ended that night as well, but for a totally different reason.

Titus reached out and grabbed Vince McMahon’s arm to stop him from walking in front of of Stephanie McMahon, and Vince McMahon was livid. He almost fired Titus that night, but he got a 60 day suspension instead.

During ARN, Arn Anderson told his point of view during that whole situation. He said that Vince McMahon was likely embarrassed by it and he almost fell. This caused an even more irate Mr. McMahon.

“I tell you what I think happened. Daniel Bryan is beloved by pretty much everybody that loves him and everybody that knows him. He is just one of those guys that endears himself to you as being a legitimate guy. I don’t know anybody that doesn’t respect and speak highly of Daniel Bryan. I think the timing of him legitimately having to retire because of health issues and you saw how it affected him backstage and you saw how it affected the other talent who really cared about the guy. I think it being such a somber, real moment, that any other day it might not have been as bad.”

“When Titus grabbed Vince by the wrist as he was starting to exit, he caught him off guard. He almost fell down. I think that embarrassed him. I think it embarrassed him more than anyone else looked at it as being a comedic moment or something, but I think in Vince’s mind, it made him look bad because he almost fell. It pissed him off right away. I think it probably, in his mind, that was a big moment that one of the talents’ careers ended because Daniel was retiring.”

“I’m thinking he probably thought to himself that this was not a time to be goofing and it got out of control really quick and it flamed up really quick. I don’t think there was any ill intention. I just don’t think Titus was thinking properly when he did it. That’s the only thing I can figure out sorting through the facts.”

Vince McMahon has many legendary stories abut his name. You can click here for a comprehensive list of 15 of those tales that turned out to be 100% true.

It’s a good thing that Vince McMahon didn’t fire Titus that night, because we would never have had the greatest entrance ever at the Greatest Royal Rumble. You can check out a little feature on that below. We’ve also included a video about the grabbing incident.